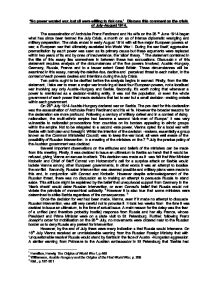 'No power wanted war, but all were willing to risk one.' Discuss this comment on the crisis of July-August 1914.

'No power wanted war, but all were willing to risk one.' Discuss this comment on the crisis of July-August 1914. The assassination of Archduke Franz Ferdinand and his wife on the 28th June 1914 began what has since been termed the July Crisis, a month or so of intense diplomatic wrangling and military preparation. The crisis ended in early August 1914 with all five major European powers at war, a European war that ultimately escalated into World War I. During the war itself, aggressive premeditation by each power was seen as its primary cause but these arguments were replaced within two years of its end by ones of inadvertence, the 'slide' theory.1 The statement contained in the title of this essay lies somewhere in between these two accusations. Discussion of this statement requires analysis of the circumstances of the five powers involved; Austria-Hungary, Germany, Russia, France and to a lesser extent Great Britain. These circumstances will be examined in this essay, namely the relative rise, decline and perceived threat to each nation, in the context of each powers desires and intentions during the July Crisis. Two points ought to be clarified before the analysis begins in earnest. Firstly, from the title statement, I take war to mean a major war involving at least four European powers, not a localised war involving say only Austria-Hungary and Serbia. Secondly, it's worth noting that whenever a power is mentioned as a decision-making entity, it was not the population, or even the whole government of each power that made decisions that led to war but a small decision-making coterie within each government. ...read more.

Sazonov, astonished at the conciliatory tone of Serbia's response to the ultimatum saw Vienna's declaration of war as a clear sign of German connivance; in his view war with the Central Powers was inevitable.6 It was therefore with full knowledge of German intervention that Sazonov, War Minister Yanushkevich and influential Minister of Agriculture Krivoshein convinced Nicholas II to order general mobilisation on the 30th July 1914. The Tsar knew that general mobilisation did not risk war, it meant war, a war that Russia did not want but felt it had no choice but to fight. Traditionally Germany has been apportioned a large amount of blame for the start of the war as it was seen as the nation with the most to gain from a major war. German leaders were gripped by what has been termed the 'topos of inevitable war,' which combined with Germany's declining relative strength (it was believed that German continental hegemony would be lost to Russia by 1916) contributed to the 'now or never' viewpoint of German military leaders in July 1914.7 Additionally a sense of isolation for Germany in the world arena and concern about Anglo-Russian military and diplomatic attempts to encircle the Reich set the scene for the 'blank check' offered to Austria-Hungary. The so-called 'blank check' was one of the key links in the chain that if broken could have probably prevented the catastrophe of July 1914. The Kaiser and Chancellor Bethman Hollweg explicitly recognised the possibility of Russian intervention in any conflict with Serbia but this was a prospect that did not alarm the German military. ...read more.