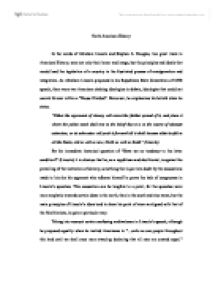 North American History In the words of Abraham Lincoln and Stephen A. Douglas, two great rivals in American History, were not only their honor and image, but the principles and ideals that would lead the legislation of a country in the frustrated process of amalgamation and integration. As Abraham Lincoln proposed in his Republican State Convention of 1858 speech, there were two American clashing ideologies in debate, ideologies that could not coexist forever within a "House Divided". Moreover, he emphasizes his beliefs when he states: "Either the opponents of slavery will arrest the further spread of it, and place it where the public mind shall rest in the belief that it is in the course of ultimate extinction, or its advocates will push it forward till it shall become alike lawful in all the States, old as well as new, North as well as South" (Lincoln) By his immediate rhetorical question of "Have we no tendency to the latter condition?" (Lincoln) it is obvious that he, as a republican and abolitionist, is against the prevailing of the institution of slavery, something that is put into doubt by the accusations made to him by his opponent who adheres himself to prove the lack of congruence in Lincoln's speeches. ...read more.

The Dred Scott versus Stanford case only augmented the tension, making the questions of its constitutionality and rightfulness be debated across the nation. While Douglas's position tends to favor a patched agreement between south and north, one of "mutual non intervention" (Douglas) that could lead to further separation as we think, Lincoln's policy, ambiguous as it might be in certain respects, was very clear in one thing: the separation that up to now had existed dividing the country in two could not continue much further. For him, apart of his abolitionist principles, above all was the union of the Federation, he could not permit each part of the nation to take its own course, something that would change the fate of the United States forever. A pivotal period would come out of his later governance that would lean the countries future northwards, until again unity would rise much later. This intention would not be clear since the beginning of Lincoln's political career, despite his clear ideals regarding slavery. This is obvious in the difference in his "House Divided" speech, and his Sixth Joint Debate with Douglas, at Quincy. Even in the different speeches mentioned in the second paper, where the words of this leader can be confusing, there is certain continuity in his thought. ...read more.

I understand it another way, and therefore I am bound to support it in the way in which I understand it." (Lincoln), yet firm in his convictions. In conclusion, it can be said that the rivalry of these men and ideals they stand for are representative of a nation, a nation that is divided by many issues, of which slavery is a crucial one in understanding the different semi spheres that were being created within what was supposed to be a federation. Although the role of it as such had not yet been clearly defined, it was up for Abraham Lincoln, after he was elected leader, to define with these speeches and hints were making more evident. The American Civil War was just a step away, and Lincoln, Douglas and the slave owners could not agree on the topic that could free a large proportion of the population, the African slaves. Based on what we see, it is clear that what was to come would shape America into what it is now, a united, slave free nation. Yet these are the roots of what is taken for granted today. This antagonism fueled some of the fiercest and defining battles fought in U.S. continental grounds. ...read more.