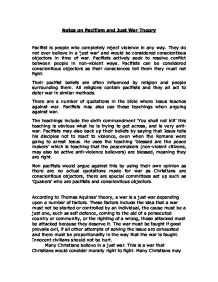 Notes on Pacifism and Just War Theory Pacifist is people who completely reject violence in any way. They do not ever believe in a 'just war' and would be considered conscientious objectors in time of war. Pacifists actively seek to resolve conflict between people in non-violent ways. Pacifists can be considered conscientious objectors as their consciences tell them they must not fight. Their pacifist beliefs are often influenced by religion and people surrounding them. All religions contain pacifists and they all act to deter war in similar methods. There are a number of quotations in the bible where Jesus teaches against war. Pacifists may also use these teachings when arguing against war. ...read more.

According to Thomas Aquinas' theory, a war is a just war depending upon a number of factors. These factors include the idea that a war must not be started or controlled by an individual, the cause must be a just one, such as self defence, coming to the aid of a persecuted country or community, or the righting of a wrong, those attacked must be attacked because they deserve it. The war must be faught if good prevails evil, if all other attempts of solving the issue are exhausted and there must be proportionality in the way that the war is faught. Innocent civilians should not be hurt. ...read more.

A holy war can not ever be classed as a 'just war' as in a holy war both sides believe that God is on their side, even though this can never be proven. An example of a Holy War is the war faught between Israel and Palestine and who owns the Holy land. This war can never be a 'just war' as it would not comply with Thomas Aquinas' conditions i. 'The war must be faught to promote good over evil, peace and justice must be resored afterwards' ii. 'The cause must bhe a just one, such as self defence, coming to the aid of a persecuted country or community, or the righting of a wrong. Those attacked must deserve it. Both sides could not claim either of the above conditions. ...read more.