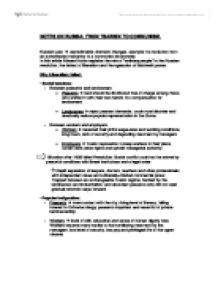 notes on russia. from tsarism to communism

NOTES ON RUSSIA: FROM TSARISM TO COMMUNISM. Russia's past --> unpredictable; dramatic changes, example: its revolution from an authoritarian monarchy to a communist dictatorship. In this article Edward Acton explains the role of "ordinary people" in the Russian revolution, the defeat of liberalism and the egression of Bolshevik power. Why Liberalism failed: � Social tensions: - Between peasants and landowners. * Peasants --> land should be distributed free of charge among those who worked it with their own hands. No compensation for landowners. * Landowners --> reject peasant demands, crush rural disorder and drastically reduce popular representation in the Duma. - Between workers and employers. * Workers --> resented their pitiful wage-rates and working conditions, long hours, lack of security and degrading treatment by managers. * Employers --> Tsarist repression to keep workers in their place, curtail trade union rights and uphold managerial authority. ...read more.

* The impact of the 1st WW on Russia and the way in which peasants, workers and soldiers reacted is essential to understand the success of the Bolsheviks in coming to power in October 1917. Explaining the Bolshevik Victory. � Effects of the 1st World War on Tsarism: - Military reversals --> soldiers refused to crush the disturbances; no support for Nich. II anymore. - Economic strain --> industry hit by repeated waves of strikes. Culminated in general strike and mass demonstrations. Incompetence of the regime and no legitimacy for Nich. II. Forced to abdicate in 1917. � Liberalism: - Formed a provisional government in 1917. - Lacked coercive power --> Liberal Gvt. was unable to use force to impose its will upon workers and peasants --> creation of a people's militia. - Policies of the liberal ministers --> they could not count upon the voluntary obedience of their new subjects for long. ...read more.