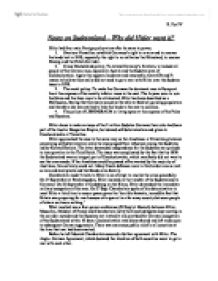 Notes on Sudetenland - Why did Hitler want it?

Notes on Sudetenland - Why did Hitler want it? Hitler had four main Foreign policy aims after he came to power. 1. Overturn Versailles: establish Germany's right to re-arm and to recover the lands lost in 1919, especially the right to re-militarise the Rhineland, to recover Danzig, and the Polish Corridor. 2. Gross Deutschland policy. To extend Germany's frontiers, to include all people of the German race, especially Austria and the Sudeten area of Czechoslovakia. Again this appears moderate and reasonable. Gave GB and Fr reason to believe they really did not need to go to war with Hitler over the Sudeten issue in 1938. 3. The racial policy. To make the Germans the dominant race in Europe at the at the expense of the racially inferior races to the east. ...read more.

If the Anschluss could be passed off as wanted by the majority of Austrians, this certainly could not. Many Czech defences were in this border area as well as iron and steel plants and the Skoda arms factory. Chamberlain made 3 visits to Hitler in an attempt to resolve the crisis peacefully. On 15 September at Berchtesgaden, Hitler insisted on the transfer of the Sudetenland to Germany. On 22 September at Godesberg on the Rhine, Hitler demanded the immediate military occupation of the area. On 27 Sept Chamberlain spoke of his determination to meet Hitler a third time to secure peace given the 'horrible fantastic, incredible fact that Britain was preparing for war because of a quarrel in a far-away country between people of whom we know nothing.' ...read more.

Whether Chamberlain actually believed he could trust Hitler or not, he certainly believed that Hitler's demands could only be met if they were legitimate and he laid great store by Hitler's statement that the Sudetenland was the last of his territorial demands. Any further aggression by Hitler could not be met by appeasement. Apart from its Sudeten German minority, Czechoslovakia also contained Poles, Hungarians and Slovaks. These too Hitler encouraged in separatist ambitions. His excuse for invading the country was to establish a protectorate for the Slovaks. In fact it was a clear act of aggression. For the first time Hitler had acted without the veil of acting on a redress of Versailles: there was no possible claim here. His actions were seen for what they were; an act of lebensraum: convincing all that his ambitions in fact had no limit. E. Fry 5V ...read more.