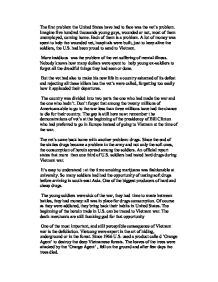 Now Vietnam has to face to the more important challenge since the war: Industrialisation.

The first problem the United States have had to face was the vet's problem. Imagine five hundred thousands young guys, wounded or not, most of them unemployed, coming home. Each of them is a problem. A lot of money was spent to help the wounded vet, hospitals were built, just to keep alive the soldiers, the U.S. had been proud to send to Vietnam. More insidious was the problem of the vet suffering of mental illness. Nobody knows how many dollars were spent to help young ex-soldiers to forget all the dreadful things they had seen or done. But the vet had also to make his new life in a country ashamed of its defeat and rejecting all these killers has the vet's were called, forgetting too easily how it applauded their departures. The country was divided into two parts the one who had made the war and the one who hadn't. Don't forget that among the twenty millions of Americans able to go to the war less than three millions have had the chance to die for their country. The gap is still here now: remember the demonstrations of vet's at the beginning of the presidency of Bill Clinton who had preferred to go in Europe instead of going to Vietnam at the time of the war. The vet's came back home with another problem: drugs. ...read more.

Now Vietnam has to face to the more important challenge since the war: Industrialisation. Don't forget that half of the populations has known the benefits of our modern society of consumption. Ho Chi Min City, as Saigon is know called, once a town full of Americans cars is now a booming town of motorcycles. This could been seen as a progress because just after the war one could see only bicycles in the streets. Since 1989, as the communism seemed to collapse all over the world, Vietnam opened its doors to foreign investment. After the forgotten promises of communism 'A television and a fridge in every home' Vietnam is know somewhere between communist economy and market economy. Industrialisation is still only on the infancy but the Vietnamese manufactures are learning fast. Did you know that television made in Hanoi are sold in Europe with a 'made in Korea' label just to push up the sales? In 1994 the U.S. dropped is nineteen-year trade embargo but the U.S. is only the fourteenth biggest investor in Vietnam. Maybe the project of more than two hundred millions dollars for a golf complex will be change this poor Ranking . Vietnam is still between communist and market economy let's prove it with the example of rice: in 1990 the government allowed the rice farmers on the Mekong delta to sell on the open market, a move that made Vietnam the world's third largest exporter, behind U.S. ...read more.

The ghost of defeat, of a dirty war, is still present in mind when U.S. are involved. When U.S. send troops in Grenada, Panama, Somalia, Saudi Arabia, Yugoslavia (not bad for one country) people worry about getting stuck in 'Another Vietnam' that's why U.S. is so reluctant in sending troops abroad but if the president decided to turn all the Televisions and reporters eyes on other direction than it's personal sexual behaviour ! But the always optimistic people of America like to think they have won the war. They like to think they have stopped communist expansion in Asia. They created the dominoes theory : If south Vietnam fell down to Communism then another countries like Thailand, Malaysia or Indonesia could be next. In fact when U.S. went to the nine delegation conference on Indochina in Geneva and when U.S. sent troops to Vietnam It applied the same theory than in Korea: Partition of a nation for a specific time and after a while permanent partition but you can't play two times the same game with the same success and what had worked well in Korea, went wrong in Vietnam. The only success of U.S. in Vietnam was to keep away China and Russia from war. It could have been the dawn of World War III. ...read more.