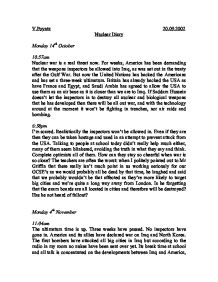 V.Poyntz 20.09.2002 Nuclear Diary Monday 14th October 10:57am Nuclear war is a real threat now. For weeks, America has been demanding that the weapons inspectors be allowed into Iraq, as was set out in the treaty after the Gulf War. But now the United Nations has backed the Americans and has set a three-week ultimatum. Britain has already backed the USA as have France and Egypt, and Saudi Arabia has agreed to allow the USA to use them as an air base as it is closer than we are to Iraq. If Saddam Hussein doesn't let the inspectors in to destroy all nuclear and biological weapons that he has developed then there will be all out war, and with the technology around at the moment it won't be fighting in trenches, nor air raids and bombing. 6:38pm I'm scared. Realistically the inspectors won't be allowed in. Even if they are then they can be taken hostage and used in an attempt to prevent attack from the USA. Talking to people at school today didn't really help much either, many of them seem blinkered, avoiding the truth in what they say and think. Complete optimists all of them. How can they stay so cheerful when war is so close? The teachers are often the worst: when I politely pointed out to Mr Griffin that there really isn't much point in us working seriously for our GCSE's ...read more.

2:47am Most of the others have drifted off to sleep now, probably hoping that when they wake this will all have been a dream. How can they sleep? More and more disturbing thoughts are coming to me; I can't keep them all out. The heat is still quite intense and many are sweating heavily, either from the heat or from their thoughts. 7:36am After all that I must have fallen asleep for a couple of hours as last time I looked at my watch it was 5:20am. Everyone is very pale and most cheeks are tearstained, a few girls have started crying again almost as soon as they woke up. I have no more tears to cry. I can't put my feelings into words; they are too deep, too personal even for a diary. 3:13pm There is nothing to do down here. The light is not sufficient to read and it's very hard to write. I slept through the morning and many others have done the same. We've heard nothing since the first attack but the heat has gone and it seems to be getting much colder. Anyone out of her bed is shivering and many have curled up tightly keeping even their heads under the covers. It has just been announced that the candles will be put on once every two hours to allow people to go to the 'loos', two chairs with buckets underneath them, which you then have to empty into a deep pit with a cover on top. ...read more.

7:59pm I am frustrated beyond words; I have fallen and have no energy to move. I must spend the night here, luckily I brought my duvet with me and although it made it almost impossible to move at least it keeps me warm now. Friday 22nd November 12:56pm I have found my house, recognisable only by the burnt out garage with the two cars in and the layout of the rooms. Nothing inside has survived. I found Mum and Dad in each other's arms, together even in death. They died in the fire; both burnt almost beyond recognition. The sight of them paralysed me for a moment, and suddenly the tears fell, the first tears since the night of the attack. I don't know how long I stood there, tears streaming down my face, as I realised that I am completely alone, there is no chance really of me finding any other relatives. Suddenly there is no point in life; there is nothing to live for. The idea of finding my parents has kept me alive but now that hope is gone. Wednesday 25th December 9:56am Christmas Day. What is Christmas? What does it stand for, the happiness I remember from last Christmas seems a million miles away, a vague dream in this land of desolation, where hope is no longer a word and happiness doesn't exist. ...read more.