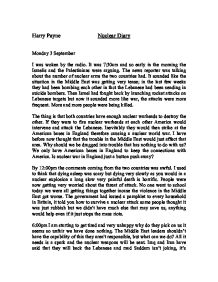 Harry Payne Nuclear Diary Monday 3 September I was woken by the radio. It was 7:30am and so early in the morning the Israelis and the Palestinians were arguing. The news reporter was talking about the number of nuclear arms the two countries had. It sounded like the situation in the Middle East was getting very tense; in the last few weeks they had been bombing each other in fact the Lebanese had been sending in suicide bombers. Then Israel had fought back by launching rocket attacks on Lebanese targets but now it sounded more like war, the attacks were more frequent. More and more people were being killed. The thing is that both countries have enough nuclear warheads to destroy the other. If they were to fire nuclear warheads at each other America would intervene and attack the Lebanese. Inevitably they would then strike at the American bases in England therefore causing a nuclear world war. I have before now thought that the trouble in the Middle East would just affect that area. Why should we be dragged into trouble that has nothing to do with us? ...read more.

If I survived and wasn't affected by the radiation then it would be okay. I could live out the rest of my life how I wanted to. Nothing would be taken for granted, life would be wonderful. I turned the news on to find that on all the channels they were talking about nuclear war. The worlds just come to a stand still over this crisis? There is all this talk about preparing for nuclear war. Is there nothing positive to say now? It started by disputes over who should own what land and now it has escalated into who will destroy the world. Why can't people settle a simple argument without causing mass destruction? What has a town like Great Dunmow done to the Lebanese? For God sake what has it got to do with us? 7:00am Israel has fired the first nuclear warhead on another country since the Second World War it hit Beirut. The world is now on its knees at any time the Lebanese could strike back with their nuclear missiles. There is a horrible feeling in air, no cars are go by no one is talking just waiting. ...read more.

All the windows have blown out and many buildings have fallen over. Outside the streets are empty and everything is boarded up like in the western films. I have started to realise how much we relied on electronic items I can't play video games, watch TV or even turn the oven on. Two days ago we filled part of the cellar full of food and we intend to live down there until it's over. It seems unnecessary but we saw a program a few days ago that said we all had to stay indoors for about three weeks to make sure the radiation wouldn't affect us. What really is difficult to comprehend is why the Lebanese did this it has destroyed the whole country the economy is now food and production of anything has stopped because of the electromagnetic pulse given out by the explosion. The world was on its knees but is now almost dead. People will probably have to revert to medieval ways of doing things. The Lebanese have probably been hit by America but I can't be sure once the rockets started being set off all the countries that had grudges against others released their weapons because they knew that there would be nothing left anyway. Was all this really worth it? ...read more.