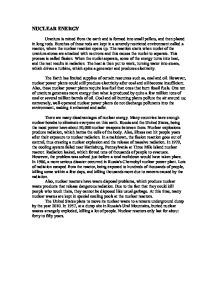 NUCLEAR ENERGY Uranium is mined from the earth and is formed into small pellets, and then placed in long rods. Bunches of these rods are kept in a severely restricted environment called a reactor, where the nuclear reaction opens up. The reaction starts when nuclei of the uranium atoms are attacked with neutrons and this causes the nuclei to separate. This process is called fission. When the nuclei separate, some of the energy turns into heat, and the rest results in radiation. The heat is then put to work, turning water into steam, which drives a turbine, which spins a generator and produces electricity. ...read more.

Coal and oil burning plants pollute the air around us; conversely, well-operated nuclear power plants do not discharge pollutants into the environment, making it enhanced and safer. There are many disadvantages of nuclear energy. Many countries have enough nuclear bombs to eliminate everyone on this earth. Russia and the United States, being the most power have about 50,000 nuclear weapons between them. Nuclear explosions produce radiation, which harms the cells of the body. Also, illness can hit people years after their exposure to nuclear radiation. In a meltdown, the fission reaction goes out of control, thus creating a nuclear explosion and the release of massive radiation. ...read more.

Also, nuclear reactors have waste disposal problems, which produce nuclear waste products that release dangerous radiation. Due to the fact that they could kill people who touch them, they cannot be disposed like usual garbage. At this time, many nuclear wastes are kept in special cooling pools at the nuclear reactors. The United States plans to move its nuclear waste to a remote underground dump by the year 2010. In 1957, at a dump site in Russia's Ural Mountains, buried nuclear wastes strangely exploded, killing a lot of people. Nuclear reactors only last for about forty to fifty years. http://www.nei.org/scienceclub/4yourclassproject/4ycp_hownucenergyworks.html http://www.nvnpp.vrn.ru/en/about/advantages.html http://library.thinkquest.org/3471/nuclear_energy.html ...read more.