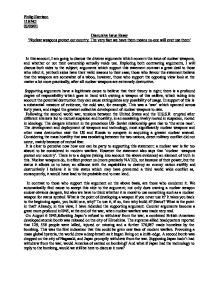 'Nuclear weapons protect our country. The very fact we have them means no-one will ever use them'

Philip Harrison 11BNO 03/09/01 Discursive Issue Essay 'Nuclear weapons protect our country. The very fact we have them means no-one will ever use them' In this account, I am going to discuss the diverse arguments which concern the issue of nuclear weapons, and whether or not their ownership actually voids use. Exploring both contrasting arguments, I will discuss both sides to the subject; arguments which support this statement contrast a great deal to those who rebut it, yet both sides have their valid reasons to their case; those who favour the statement believe that the weapons are somewhat of a taboo, however, those who support the opposing view look at the matter a lot more practically, after all nuclear weapons are extremely destructive. Supporting arguments have a legitimate cause to believe that their theory is right; there is a profound degree of responsibility which goes in hand with owning a weapon of this calibre, which taking into account the potential destruction they can cause extinguishes any possibility of usage. ...read more.

In contrast to those who support this argument on the above basis, are those who condemn it. We automatically find cause to accept this side to the argument; not only does owning a nuclear weapon endow obvious dangers, but also we have to think whether it is moral to use something such as a nuclear weapon for status symbol. What is the point of developing a weapon if you never use it? It takes you back to the beginning again, you build one, why? To use it, if no, then why build it? Status? What is the point in that? Already, in this view, I have ridiculed the supporting argument. Counter arguments become a great more profound in1945, at the end of the war, when nuclear warfare was made very real. On August 6 1945,following Japan's refusal to withdraw from the war, a combined British-American developed atomic bomb was released on the city of Hiroshima. ...read more.

For example, the arms race may have had an effect global safety; nations had the potential to destroy each other in an instant. However, maybe the status purposes were all their owners intended to develop them for. Maybe the hostility and fear was the furthest the competition was going to go, as neither country bombed each other in the cold war. Both nations cowarded from nuclear attacks as it would have provoked global bombing between communists and capitalists worldwide. There was potential for nuclear war, but it all simply came down to a status struggle in the end; maybe the hostility and ownership of these weapons prevented any wars that would have occurred if the weapons hadn't had been invented. In fairness, I have to state clearly that I cannot be of party to those who agree with nuclear weapons. However, I firmly believe that they have prevent many smaller scale wars, so are these weapons good as peacekeepers? It can never be known, however, what we do know is that nuclear weapons do destroy thousands of people, but are we past that now? We might only know when it's too late. ...read more.