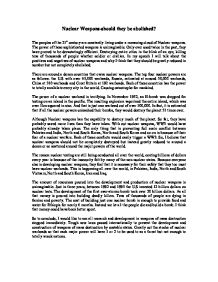 Nuclear Weapons - should they be abolished?

Nuclear Weapons-should they be abolished? The peoples of the 21st century are constantly living under a menacing cloud of Nuclear weapons. The power of these sophisticated weapons is unimaginable. Only ever used twice in the past, they have proved to be devastatingly efficient. Destroying entire cities in the blink of an eye, killing tens of thousands of people whether soldier or civilian. In my speech I will talk about the positives and negatives of nuclear weapons and why I think that they should be greatly reduced in number but not completely abolished. There are around a dozen countries that owns nuclear weapons. The top four nuclear powers are as follows: the U.S with over 65,000 warheads, Russia, estimated at around 50,000 warheads, China at 310 warheads and Great Britain at 192 warheads. ...read more.

Although Nuclear weapons has the capability to destroy much of the planet. So far, they have probably saved more lives than they have taken. With out nuclear weapons, WW3 would have probably already taken place. The only thing that is preventing full scale conflict between Pakistan and India, North and South Korea, North and South Korea and so on is because of their fear of a nuclear warfare. Each of these conflicts would easily trigger a WW3. So, I believe that nuclear weapons should not be completely destroyed but instead greatly reduced to around a dozen or so scattered around the major powers of the world. The reason nuclear testing are still being conducted all over the world, costing billions of dollars every year is because of the insecurity felt by many of the non-nuclear states. ...read more.

The development of the first ever-atomic bomb took over 20 billion dollars. As all that money is poured into building deadly killers. Tens of thousands of people are dying in famine and poverty. The cost of building just one nuclear bomb is enough to provide food and water for Ethiopia for nearly 6 months. Instead we let all the people die and build a bomb. I think that money could have been better spent. So to conclude, I would like to see all research and development in weapons of mass destruction stopped immediately. Tough new laws passed internationally to prevent the development and construction of weapons of mass destruction by unstable states. Greatly cut the stocks of nuclear warheads so that each major power will have 1 or 2 to be used to as a threat but not enough to totally wreck nations. ...read more.