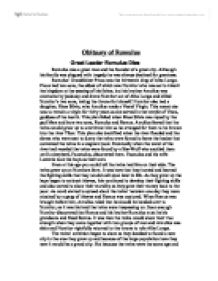 Obituary of Romulus Great Leader Romulus Dies Romulus was a great man and the founder of a great city. Although his family was plagued with tragedy he was always destined for greatness. Romulus' Grandfather Proca was the thirteenth king of Alba Longa. Proca had two sons, the eldest of which was Numitor who was set to inherit the kingdom at the passing of his father, but his brother Amulius was overcome by jealousy and drove Numitor out of Alba Longa and killed Numitor's two sons, taking the throne for himself. Numitor also had a daughter, Rhea Silvia, who Amulius made a Vestal Virgin. This meant she was to remain a virgin for thirty years as she served in the temple of Vesta, goddess of the hearth. This plan failed when Rhea Silvia was raped by the god Mars and bore two sons, Romulus and Remus. Amulius feared that the twins would grow up to overthrow him so he arranged for them to be thrown into the river Tiber. ...read more.

When Remus was brought before him, Amulius ruled that he should be handed over to Numitor, as it was his land the twins were trespassing on. Soon enough Numitor discovered that Remus and his brother Romulus must be his grandsons and freed Remus. It was then the twins would show their true strength when they came together with two groups of men and Amulius was slain and Numitor rightfully returned to the throne to rule Alba Longa. The twins' ambition began to show as they decided to found a new city in the area they grew up and because of the large population here they new it would be a grand city. But because the twins were the same age and each was determined that he was the rightful ruler of the city they couldn't agree who would be king. A bitter rivalry began and the twins decided to let the Gods choose the king. ...read more.

Romulus was willing to displease the gods, blaspheme even (by having the kidnapping taken place at Neptune's festival), to succeed. The Sabine women were each taken into marriage by Roman men and Romulus' compassion saw to it that the women were all treated well. Before long the people of Sabinum declared war on Rome and looked to be on top until Romulus himself inspired his men with his great bravery in battle. Rome's men fought back and eventually it was the women of Sabinum by showing a great deal of trust and respect by saying they were happy. This proved a blessing for both cities as they joined together to make Rome greater and it began to prosper. Overall Romulus was a very determined man and was very patriotic of Rome; you could see that Romulus always had Rome's interests at heart. Romulus proved the great heroism he was always destined for. Although Romulus did what some would see as bad things for Romans would see them as heroic and necessary for the future of Rome. ...read more.