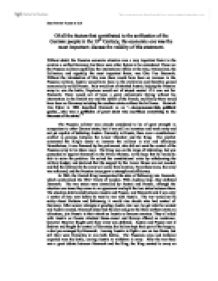 Of all the factors that contributed to the unification of the German people in the 19th Century, the economic one was the most important: discuss the validity of this statement.

Of all the factors that contributed to the unification of the German people in the 19th Century, the economic one was the most important: discuss the validity of this statement. Without doubt, the Prussian economic situation was a very important factor in the creation a unified Germany, but there were other factors to be considered. These are the Prussian military capability, the international affairs at the time, Nationalism, the Zollverien, and arguably, the most important factor, was Otto Von Bismarck. Without the introduction of this man there would have been no increase in the Prussian military, Austria would have been in the Zollverien and therefore gained economically as did Prussia. Italy would not of attacked Austria, helping the Prussian army to win the battle, Napoleon would not of stayed neutral if it was not for Bismarck. There would not of been a great nationalistic feeling without his intervention in the Danish war and the defeat of the French, and finally there would have been no Germany including the southern states without his brilliance. Heinrich Von Sybel in 1894 described Bismarck as an '...incommensurable political genius...who was a politician of great stock who sacrificed everything to the interests of the state.' 1 The Prussian military was already considered to be of great strength in comparison to other German states, but it was still an immature and weak army and not yet capable of defeating Austria. ...read more.

Eventually France feel for the bait and declared war with Prussia on July 15, 1870. Prussia gained the advantage and surprised France by attacking first, the French were quickly defeated and by 28th of January 1871, the Prussian army had control of Paris. Then Bismarck had his crowning moment by signing a peace treaty and more importantly, crowning William the first, as the Emperor of Germany. Bismarck would not of been able to achieve all he did without his ability to recognise and manipulate international affairs, he used and abused his neighbours hate for each other to gain an advantage for an ever growing Prussia. He did not just declare war on Austria, as he knew the capabilities of his forces and knew there would be repercussions from France and Russia. Bismarck knew he had that he could count on the neutrality of the Russians because of his support for them during the Polish revolution. In addition, the Austrians did not support Russia when it was asked for during the Crimean War. Therefore, Russia owed them no favours. France was a little more complicated, although France and Austria were enemies, he could not be sure that they would stay neutral. Bismarck coincidentally visited Biarritz the same time as Napoleon, and met with the emperor. ...read more.

The problem with this analogy is it allows no credit for the skill, guile and genius of a man who created the unification of Germany in such a short space of time. Yes, he had a lot of luck, but he was also extremely dedicated, once he set out to achieve something, he stopped at nothing until it had been accomplished. Bismarck knew himself that he had limitations, he expressed this by pointing out 'I am not so arrogant as to assume that the likes of us are able to make history. My task is to keep an eye on the currents of the latter and steer my ship in them as best I can.4' It is true that he would not of been able to achieve all he did without the backing of the Prussian economy, but money does not always equal success and power. It takes a great and strong man to control were the money is spent. In 1862 at the great expedition Disraeli asked Bismarck what would he do if he came to power Bismarck replied. '...he would reorganise the army, with or without the support of parliament; secondly, he would destroy Austrian domination of the German confederation; thirdly, he would unify Germany under Prussian leadership.5' Later in that year, he was appointed Prime minister of Prussia. ...read more.