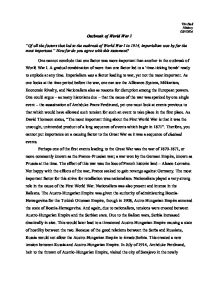 &quot;Of all the factors that led to the outbreak of World War I in 1914, imperialism was by far the most important.&quot; How far do you agree with this statement?

Tim Bell History 05/10/04 Outbreak of World War I "Of all the factors that led to the outbreak of World War I in 1914, imperialism was by far the most important." How far do you agree with this statement? One cannot conclude that one factor was more important than another in the outbreak of World War I. A gradual combination of more than one factor led to a 'time-ticking bomb' ready to explode at any time. Imperialism was a factor leading to war, yet not the most important. As one looks at the time period before the war, one can see the Allicance System, Militarism, Economic Rivalry, and Nationalism also as reasons for disruption among the European powers. One could argue - as many historians due - that the cause of the war was sparked by one single event - the assasination of Archduke Franz Ferdinand, yet one must look at events previous to that which would have allowed such tension for such an event to take place in the first place. As David Thomson states, "The most important thing about the First World War is that it was the unsought, unintended product of a long sequence of events which begin in 1871". Therfore, you cannot put importance on a causing factor to the Great War as it was a sequence of chained events. ...read more.

This was to assure for defence against France, yet Russia pulled out of this alliance after 5 years in 1879 leaving Germany and the Austo-Hungarian in 'The Dual Alliance'. This alliance ensured at least neutrality in the case of an attack by Russia or its ally towards any of the two nations. Three years after the formation of 'The Dual Alliance', Italy joined them forming a new 'Triple Alliance'. Because of the occupation in Tunis, Italy felt more secure in alliance with a common enemy. The 'Triple Alliance was merely against France, not Britain. In 1887, a reinsurance treaty was signed between Russia and Germany which meant neutrality between them unless a direct attack by Germany on France was made, or an attack by Russia on Austria-Hungary. This would ensure Germany not to have a hypothetical two-front war. The treaty was not renewed after 3 years, due to a lack of interest by the new German Kaiser. Russia and France now feared the 'Triple Alliance' therefore creating an alliance amongst them known as the Franco-Russian Alliance. The purpose of this alliance was to act as a defense against the 'Triple Alliance'. In 1904 an alliance was created between Britain and France. This was a weak alliance which only created a diplomatic support and agreement on areas of mutual interest such as Egypt and Morocco. ...read more.

This changed when Germany reacted and six-folded their coal production in 1913. That same year, Germany increased its standing army for few reasons. Russia and France took a further step towards war and inreased their military service years. At this point, a war seemed even more likely due to the focus on militarism. Countries started to think about creating war plans. A man named Alfred Von Schlieffen was responsible for German's plan. The plan would take into account the allied system between France and Russia and a hypothetical two-front war. This plan would allow for a fast and hard knock towards Paris through neutral Belgium, and take out France before Russia could mobilize their troops on the Eastern front. Although this plan was top-secret, it showed that German surely expecting a war, therefore ready for an outbreak. Therefore, although imperialism played an important role in the outbreak of the war, one cannot forget all the other factors involved. Imperialism did not play the most important role in the outbreak of the war. It was a combination of nationalism, the alliance system, militarism, and imperialism that led to the outbreak of the war. One could perhaps argue that without the alliance system, without militarism, without imperialism, or without nationalism there would not have been a war, but all of them are surely directly related and I do not think importance of a factor is relevant to the outbreak of the Great War. ...read more.