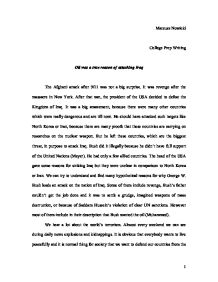 Oil was a true reason of attacking Iraq

Mateusz Nowicki College Prep Writing Oil was a true reason of attacking Iraq The Afghani attack after 9/11 was not a big surprise. It was revenge after the massacre in New York. After that war, the president of the USA decided to defeat the Kingdom of Iraq. It was a big amazement, because there were many other countries which were really dangerous and are till now. He should have attacked such targets like North Korea or Iran, because there are many proofs that these countries are carrying on researches on the nuclear weapon. But he left these countries, which are the biggest threat, in purpose to attack Iraq. Bush did it illegally because he didn't have full support of the United Nations (Meyer). He had only a few allied countries. The head of the USA gave some reasons for striking Iraq but they were unclear in comparison to North Korea or Iran. We can try to understand and find many hypothetical reasons for why George W. ...read more.

Bush, decided to attack Iraq (Emery) First of all, it was a war towards the country, not the Saddam Hussein's regime. The main and official goal for the war was a freedom for Iraqi people. Everything would be fine when it was a true. Now Iraqi people are more frightened than they were during Saddam Hussein regime. Iraq is defeated, but it is still occupied by the USA's troops. Bush should have given Iraq a chance to create its own independent government, but US soldiers station in Iraq all the time and Iraqi people are confused because of that fact. After the war the Iraq's economy is damaged. US Air Force destroyed many strategic buildings during the war. Now Iraq needs them to maintain their economical stability. What is the reason of such Bush's decision? The answer is simple: US damaged Iraq enough due to Iraq was dependent on them. Now USA can control and gain profits on almost all oil fields and oil platforms (Meyer). ...read more.

They were exploring whether Iraq had the massive destruction weapon or not. This organization, which contains most countries from all other the world, sent a group of inspectors in purpose to find some evidences. After a lot of searching they didn't find any trace of such kind of weapon. United Nations decided not to invade Iraq, because they didn't see a reason. It was a rude shock for George W. Bush. This statement (not supporting war) wasn't a big problem for USA President at all. Bush and British Prime Minister, Tony Blair decided to invade and defeat Iraq. Why did they do it? Here is another argument that oil was beyond the all rules. Bush attacked Iraq illegally because of breaking the rules of the United Nations. There must be billions of dollars behind this move - oil (Emery). George W. Bush and his administration gave some reasons for attacking Iraq. However few months ago, we found out that evidences, which were presented by American President, were false and prepared. Millions if people heart it during daily news. I am sure that Bush must have noticed that he stepped across the line you can never step back. ...read more.