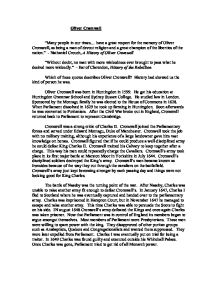 Oliver Cromwell "Many people in our times... have a great respect for the memory of Oliver Cromwell, as being a man of devout religion and a great champion of the liberties of the nation." - Nathaniel Crouch, A History of Oliver Cromwell "Without doubt, no man with more wickedness ever brought to pass what he desired more wickedly." - Ear of Clarendon, History of the Rebellion Which of these quotes describes Oliver Cromwell? History had showed us the kind of person he was. Oliver Cromwell was born in Huntingdon in 1599. He got his education at Huntingdon Grammar School and Sydney Sussex College. He studied law in London. Sponsored by the Montagu family he was elected to the House of Commons in 1628. When Parliament dissolved in 1629 he took up farming in Huntingdon. ...read more.

The battle of Naseby was the turning point of the war. After Naseby, Charles was unable to raise another army fit enough to defeat Cromwell's. In January 1647, Charles I fled to Scotland where he was eventually captured and handed over to the parliamentary army. Charles was imprisoned in Hampton Court, but in November 1647 he managed to escape and raise another army. This time Charles was able to persuade the Scots to fight on his side. IN august 1648 Cromwell's army defeated the Kings and once again Charles was taken prisoner. Now that Parliament was in control of England its members began to argue amongst themselves. Most members of Parliament were Presbyterians. These men were willing to spare power with the king. They disapproved of other puritan groups such as Anabaptists, Quakers and Congregationalists and wanted them suppressed. ...read more.

Even though House of Commons continued to meet, it was Cromwell who controlled everything. As soon as someone disagreed with him he abolished it. In 1658 Cromwell decided he wanted his son, Richard Cromwell, to become the Lord Protector after him. The English army did not care much for this, while they respected Oliver, his son was just a country boy. On September 3rd, 1658 Oliver Cromwell passed away. His son took his positions as Lord Protector. Later on the Generals forced Richard to resign from government. Sadly to this day we still have people like Oliver Cromwell running the world. We hear about them all the time in the news. People like Osama Bin Laden and Sudam insane. You hear of these people and you think crazy, insane, and terrorists. When you hear the name Oliver Cromwell do you think of these things? Hopefully you believe the second quote, he was a brutal man who got to his position by luck. The chips all fell his way. ...read more.