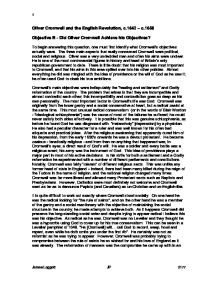 Oliver Cromwell and the English Revolution, c.1642 - c.1658 Objective B - Did Oliver Cromwell Achieve his Objectives? To begin answering this question, one must first identify what Cromwell's objectives actually were. The three main aspects that really concerned Cromwell were political, social and religious. Oliver was a very undecided man and often his aims were unclear. He is one of the most controversial figures in history and head of Britain's only republican government to date. There is little doubt that his religion was most important to Cromwell, and that his aims in this area spilled over into his other policies. Almost everything he did was mingled with the idea of providence or the will of God as he saw it; he often used God to cloak his true ambitions. Cromwell's main objectives were indisputably the "healing and settlement" and Godly reformation of the country. The problem that arises is that they are incompatible and almost contradict each other; this incompatibility and contradiction goes as deep as his own personality. The most important factor in Cromwell's life was God. Cromwell was originally from the lower gentry and a social conservative at heart, but a radical zealot at the same time. This most unusual radical conservatism (or in the words of Blair Wordon - "ideological schizophrenia") was the cause of most of the failures he suffered; he could never satisfy both sides effectively. It is possible that this was genuine schizophrenia, as before he found God he was diagnosed with "melancholy" [depression] by a physician. ...read more.

Two things they hated were religious liberty and the army (mainly because of the army's huge influence in government), and Cromwell was strongly associated with both. It took Cromwell weeks to decide not to accept the crown. His eventual decline of the offer was ultimately down to his strong will to do God's bidding. By providence God had shown that the capital punishment of Charles I was right, and the army had fought a most unpleasant civil war for parliament and a change in the constitution. He knew that the army would have been likely to rise up against him if he accepted, as this is just what they had fought to remove. However, Cromwell was not at all happy with the execution; his conservative side longed for a peaceful settlement with the king. What probably took him so long to decline was that he knew the crown could have provided the settlement the country needed. It is clear that the majority of the population were in a way lost without a divine king to rule them, and this can be seen with the benefit or retrospect as the crown was back only two years after Cromwell's death. However there is in addition a less spiritual reason; if Cromwell had accepted he would have had reduced powers to carry out the reforms he wanted; his powers as Lord Protector were far greater than the king's. Perhaps he was also contemplating whether or not the crown was one of his objectives. ...read more.

A modern and impressive navy was also constructed, and most of the old rivalries disappeared. Indeed, people like Thomas Mainwaring in particular held banquets at which old civil war adversaries dined together. An obvious example of Cromwell's own personal achievement was his military prowess. He rose through the ranks to become head of the best army England had known, and it was this position that enabled him to take on the role of Lord Protector after the regicide. Cromwell's main objective of Godly reformation was essentially a failure that resulted in the restoration of the monarchy a mere two years after his death. The reasons for this failure are twofold: The apathy or unwillingness of the population towards becoming God's nation and Cromwell himself. He could not manage to create one stable government in all his time as Lord Protector. And although he failed in his main task in the long run, it was a noble attempt that set a precedent in world politics. The progress made to settle and heal the country made their mark too. Cromwell's zeal had got him to the number one spot in the country, but once there he was did not appear to be able to make good his ideals. Cromwell's early life and upbringing as an English gentleman held him back from any tangible radical reformation and the ideas of settlement and reformation were in continuous conflict in his mind. All quotes are taken directly from, or from sources in: "Stuart England (1603-1714)" - B. Coward 1 James Leggett JP 2177 ...read more.