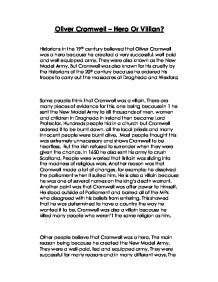 Oliver Cromwell - Hero Or Villian? Historians in the 19th century believed that Oliver Cromwell was a hero because he created a very successful, well paid and well equipped army. They were also known as the New Model Army. But Cromwell was also known for his cruelty by the historians of the 20th century because he ordered his troops to carry out the massacres at Drogheda and Wexford. Some people think that Cromwell was a villain. There are many pieces of evidence for this, one being because in 1 he sent the New Model Army to kill thousands of men, women and children in Drogheda in Ireland then became Lord Protector. ...read more.

But the Irish refused to surrender when they were given the chance. In 1650 he also sent his army to crush Scotland. People were worried that Britain was sliding into the madness of religious wars. Another reason was that Cromwell made a lot of changes, for example; he dissolved the parliament when it suited him. He is also a villain because he was one of several names on the king's death warrant. Another point was that Cromwell was after power to himself. He stood outside of Parliament and barred all of the MPs who disagreed with his beliefs from entering. ...read more.

The Civil Wars which broke out in 1642, made it clear that he had unexpected talents and abilities. Though totally lacking in previous military experience, he created and led a superb force of cavalry. He led this army for many years. Another reason that some people think Cromwell was a hero is because when he was offered the crown he did not accept it. This was because in those days most kings had a bad reputation. Cromwell didn't want to be thought of badly and he was then known as "lord protector". Overall I don't know if Cromwell was a hero or villain because I have many points for both sides of the argument. By Sophie Roche 8N2A ...read more.