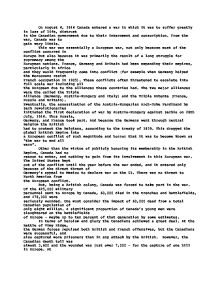 On August 4, 1914 Canada entered a war in which it was to suffer greatly in loss of life, distrust in the Canadian government due to their internment and conscription - From the war, Canada was to gain very little.

On August 4, 1914 Canada entered a war in which it was to suffer greatly in loss of life, distrust in the Canadian government due to their internment and conscription. From the war, Canada was to gain very little. This war was essentially a European war, not only because most of the conflict occurred in Europe but also because it was primarily the result of a long struggle for supremacy among the European nations. France, Germany and Britain had been expanding their empires, particularly in Africa and they would frequently come into conflict (for example when Germany helped the Moroccans resist French occupation in 1905). These conflicts often threatened to escalate into full scale war including all the European due to the alliances these countries had. The two major alliances were the called the Triple Alliance (Germany, Austria-Hungary and Italy) and the Triple Entente (France, Russia and Britain). Eventually, the assassination of the Austria-Hungarian Arch-Duke Ferdinand by Serb revolutionaries initiated the first declaration of war by Austria-Hungary against Serbia on 28th July, 1914. ...read more.

However, the Canadian death toll was almost 3,600 and the wounded was just over 7,000 - for the capture of one hill in Europe. At Passchendaele and Ypres, the Canadian forces acquitted themselves heroically, but at Passchendaele 16,000 Canadians were killed, and at Ypres 6,000 Canadians died. It is probable that, despite the Canadian achievements, such as at Vimy Ridge, the course of the war was unaffected by the presence of the Canadian troops. Despite the nearly half million troops supplied by Canada, this number pales compared with the twelve million Russians, the eight million French, the five million Italians and the almost nine million from the total British Empire most of whom would be from Britain. While the Canadian involvement on the war front was detrimental to Canada and not a major contribution to the Allied war effort, the impact of the war on the "home front" was also having a negative effect. In August 1914, the passing of the War Measures Act granted the Canadian government unrestricted power during the war - a power which was abused. ...read more.

They also objected to being forced to serve under a British command. Riots ensued in Quebec in 1918 after conscription had become law with the passing of the Military Service Act by the Conservative Prime Minister Sir Robert Borden, leaving four Francophones dead. This single event raised the level of suspicion and mistrust by the Francophones towards the Anglophones to a new level and this continued in Canada until 1985. For many decades, French Canadians regarded the Conservatives as a party for Anglophones. Canada lost the trust of one of its largest culture groups, the French. It is clear that what several kilometers Canada gained the Allies, she had no reason to lose her men or anything to gain to warrant the division of the nation that conscription caused. Nor were the several kilometers enough to justify the brutal and unjustifiable treatment of foreign immigrants to Canada. World War I brought nationalism to a new level - a level where Canadians feel justified in discriminating other races. These losses were suffered for a ridge or 5km of mud. Zo� Doyle - Canada and World War I Page 1 of 2 Printed: 12/21/2005, 4:46 PM ...read more.