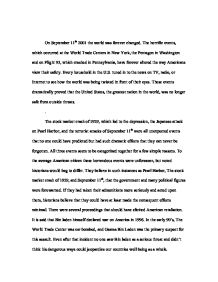 On September 11th 2001 the world was forever changed.

On September 11th 2001 the world was forever changed. The horrific events, which occurred at the World Trade Centers in New York, the Pentagon in Washington and on Flight 93, which crashed in Pennsylvania, have forever altered the way Americans view their safety. Every household in the U.S. tuned in to the news on TV, radio, or Internet to see how the world was being twisted in front of their eyes. These events dramatically proved that the United States, the greatest nation in the world, was no longer safe from outside threats. . The stock market crash of 1929, which led to the depression, the Japanese attack on Pearl Harbor, and the terrorist attacks of September 11th were all unexpected events that no one could have predicted but had such dramatic effects that they can never be forgotten. All three events seem to be categorized together for a few simple reasons. To the average American citizen these horrendous events were unforeseen, but noted historians would beg to differ. ...read more.

Such a strong sense of nationalism can easily be compared to that of the fall of the Berlin Wall in 1989, when East and West Germany celebrated their reunion as one, after being isolated for so long. Subsequent to September 11, the United States faced many abrupt transformations as far as pastimes, lifestyles, and entertainment goes. There were a few noticeable differences from the changes following WWII, to those of September 11th. For example, Baseball, the great American pastime was brought to a standstill after September 11, where as Roosevelt motivated people to go to baseball games, and had baseball play a part in the healing of the country. Another difference from 9-11 was that after Pearl Harbor, and the crash of 1929, there were severe cut backs and limitations on how much of certain commodities, such as gasoline and sugar, the average American could use. The difference now is that we are currently at war with the oil capitals of the world. ...read more.

September 11th, 2001 was a horribly significant date in not only American history but in world history as well. It brought back horrific memories of such instances as The Bombing of Pearl harbor and can even be compared to the hardships and struggles of The Stock Market Crash of 1929. As a result, the American people came together as one in a battle we like to call the "war on terrorism" 2. It is obvious this war may be infinite but it is worth the struggle, just knowing, in the future we may perhaps avoid such devastating events. As James Baldwin once wrote "A country is only as strong as the people who make it up and the country turns into what the people want it to become...we made the world we're living in and we have to make it over." 3 I think we should all recollect on the events step by step of September 11th, and take into mind, the advice that Baldwin has given us. Someday our country can completely overcome all of its vulnerability and end any chances of a date like this form reoccurring. ...read more.