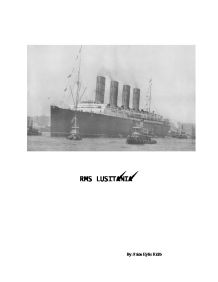 RMS LUSITANIA By: Frida Hylin Ek3b On the 7 May 1915 at 14:30, then 240 metre long and 27 meter wide ship the Lusitania sunk to the sea bed. Despite the fact that so many were killed, 1,195 people, this ship has not become one of history's most well known vessels, unlike the Titanic. This is due to the fact that the Lusitania was sunk by the Germans during the First World War. The Lusitania and her sister ship, the Mauretania, were built by John Brown & CO Ltd in Glasgow for the purpose of winning back the Blue Riband, an award to ships crossing the Atlantic ocean in the quickest time. * http://www.lusitania.net/ * http://www.geocities.com/titanicandco/lusitania.html * http://www.webtitanic.net/framelus.html * http://europeanhistory.about.com/library/prm/bllusitaniaprm4.htm * http://www.ocean-liners.com/ships/lusitania.asp * http://www.lostliners.com/Liners/Cunard/Lusitania/finalvoyage.htm * http://www.pbs.org/lostliners/lusitania.html The Lusitania became the largest ship of its time; it had 7 decks for the passengers. The first class section was like a palace and, exactly like the Titanic would later be; provided passengers with the opportunity to travel in rooms decorated in different historical styles. In first class there was great luxury in the form of music rooms, smoking rooms, salons and caf�s. ...read more.

Captain Turner took all the possible precautionary measures; he ordered that all the life boats should be prepared and hung out and that all the water tight doors should be closed. The number of lookouts was doubled and the motors were ready to enable the ship to sail away at full speed. At 8:00 that morning the ship's speed was lowered to 18 knots in preparation for docking in to Liverpool at 16:00 the next day. At 12.40 the Lusitania changed course to come in to land from a different angle, the ship was steered closer to land and at 14:00 the passengers were just finishing their lunch. At 14.15 the Lusitania was only 10-15 nautical miles from "Old Head of Kinsale", the weather was clear and the sea was calm when Captain Turner heard the second mate Leslie Morton shout: "There is a torpedo coming, Sir. Immediately afterwards an explosion was heard on the starboard side of the ship between the third and fourth funnels. Following this there was another explosion heard which was thought to be another torpedo at the time, although it has since been established that it was an internal explosion the cause of which has not been determined. ...read more.

The wreck itself has collapsed and is it has become as good as an unrecognisable pile of ship parts. The wreck was first visited in 1935 by Englishman Jim Jarrat, he stated that the ship had a hole that had been caused by an internal explosion most probably a result of the ammunition being carried on board. It was not until 1953 that the ship was visited again, and then, at the beginning of the 1960's John Light started to retrieve objects from the Lusitania wreckage. In 1993 Robert Ballard visited the wreck and photographed it fir the National Geographic, he reached the conclusion that the second explosion probably was not due to the cargo carried by the Lusitania but that the torpedo had hit the coal storage which had in turn exploded. * http://www.pbs.org/lostliners/lusitania.html Lusitania was a British passenger liner, carrying a number of Americans, torpedoed off the Irish coast by the German submarine U-20 during World War I. The sinking and subsequent death of several civilians is cited by many to be one of the first modern examples of "total war." The nature of the explosions that sank the ship and the politics surrounding her demise have never been satisfactorily explained and to this day remain shrouded in a cloud of mystery. ...read more.