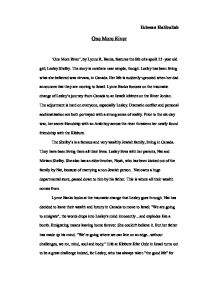 Ikhwan Halibullah One More River 'One More River', by Lynne R, Banks, features the life of a spoilt 15-year old girl, Lesley Shelby. The story is nowhere near simple, though. Lesley has been living what she believed was nirvana, in Canada. Her life is suddenly uprooted when her dad announces that they are moving to Israel. Lynne Banks focuses on the traumatic change of Lesley's journey from Canada to an Israeli kibbutz on the River Jordan. The adjustment is hard on everyone, especially Lesley. Dramatic conflict and personal acclimatization are both portrayed with a strong sense of reality. Prior to the six-day war, her secret friendship with an Arab boy across the river threatens her newly found friendship with the Kibbutz. ...read more.

"We're going where we can live on an edge...without challenges, we rot, mind, soul and body." Life at Kibbutz Kfar Orde in Israel turns out to be a great challenge indeed, for Lesley, who has always taken "the good life" for granted. At home she was popular, successful at school, and trendily dressed. Now it's all gone. A stranger in a strange land, she has to start from scratch, and that includes learning a new language, doing manual work and sharing sleeping quarters with three others - one of them a boy. Lesley encounters many difficulties in making new friends. Lesley cannot accept them at first. Some of the children at the Kibbutz think that Lesley could not fit with them because they think she is rich and a stuck-up. ...read more.

"She started to tremble... she burst into tears". Lynne Banks defines in this book that love cant be destroyed, even by the greatest force on earth. Who would think that war not only separates people, but reunites them as well. Noah has come to Israel as a volunteer soldier, and Nat has happily accepted him back into the family. Lesley is now no longer regretting coming to Israel. Now she sees what her father said. They are now living happily, as a family. 'One More River' is a truly great novel. Lynne Banks is able to portray very common dramatic conflicts and self-acclimatization. She presents her writing with a strong sense of reality. This book is a great read for anyone any age, who is interested in changes in life. The book is really interesting. It makes you think and decide which is more important: religion or culture? ...read more.