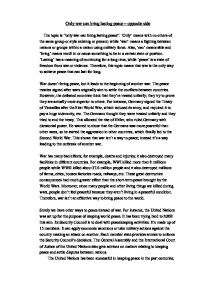 Only war can bring lasting peace - opposite side.

Only war can bring lasting peace - opposite side The topic is "only war can bring lasting peace". 'Only' means with no others of the same group or style existing or present; while 'war' means a fighting between nations or groups within a nation using military force. Also, 'can' means able and 'bring' means result in or cause something to be in a certain state or position. 'Lasting' has a meaning of continuing for a long time, while 'peace' is a state of freedom from war or violence. Therefore, this topic means that war is the only way to achieve peace that can last for long. War doesn't bring peace, but it leads to the beginning of another war. The peace treaties signed after wars originally aim to settle the conflicts between countries. ...read more.

For example, WWI killed more than 8 millions people while WWII killed about 37.6 million people and it also destroyed millions of farms, cities, houses factories roads, railways, etc. These great destructive consequences had much greater effect than the short-term peace brought by the World Wars. Moreover, since many people and other living things are killed during wars, people don't feel peaceful because they aren't living in a peaceful condition. Therefore, war isn't an effective way to bring peace to the world. Surely we have other ways to peace instead of war. For instance, the United Nations was set up for the purpose of keeping world peace. It has been trying hard to fulfill this aim. Its Security Council is to deal with peacekeeping activities. It's made up of 15 members. ...read more.

For example, after WWI, discontent of people rose, they longed for strong leader to solve the left-behind problems of the war, so there were different kinds of totalitarianism rising. There was Communism in Russia, Fascism in Italy, Nazism in Germany, etc. Some of these totalitarian ideas believed in using violence to get rid of their enemies, and they followed an expansionist foreign policy. The leaders of these countries wanted to have greater power, so they aggressed other countries. Their aggressions finally brought about WWII. However, the Western democratic states were not able to stop the aggression of these states. For example, after WWI, France and Britain were greatly weakened. Many problems were brought by the war, like rising national debts, unemployment and economic recession. They couldn't do anything to stop the aggression of the totalitarian states due to their own problems. That's why they adapted the appeasement policy, which only encouraged the totalitarian states to expand further, and these aggressions finally resulted in WWII. ...read more.