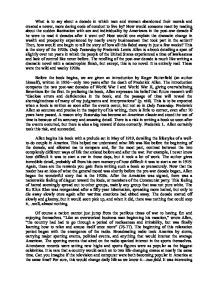 What is to say about a decade in which men and women abandoned their morals and created a newer, more daring code of conduct to live by? How would someone react by reading about the sudden fascination with sex and individuality by Americans in the post-war decade if he were to read it decades after it went on? How would one explain the dramatic change in wealth and prosperity experienced by nearly every businessman that took part in the action? Then, how would one begin to tell the story of how all this faded away in just a few weeks? This is the story of the 1920s. Only Yesterday by Frederick Lewis Allen is a book detailing a span of slightly over ten years in which the people of the United States experienced a time of lawlessness and lack of control like never before. The retelling of the post-war decade is much like writing a dramatic novel with a catastrophic finish, but except, this is no novel. It is entirely real. These were the wild and wacky 1920s. Before the book begins, we are given an introduction by Roger Butterfield (an author himself), written in 1956-only two years after the death of Frederick Allen. ...read more.

I was very surprised to read all of this, only wondering when any remote sense of values was going to reemerge back into the minds of Americans. The sense eventually did come back, and in very ugly fashion. It seemed as if Americans were almost ashamed at what they had done; I certainly cannot blame them. They could not go through life without a set of values and everything seeming meaningless and unimportant. It was only until the end of the decade when the nation had officially calmed down. Sadly, it took utter ruin to do so. Soon, there came a bump in the road: The Harding Scandals. When Warren G. Harding took the presidency in 1921, all was running smoothly on the outside. Harding was calm, stern, and generally laid-back man. After only two years of his term went by, however, Harding died of an alleged apoplexy. This was a huge shock to the American people, as it obviously should have been. It is difficult, for me at least, to imagine a president dying mid-way through his term. It would be even more difficult had the people known the corruption that existed within his Administration. Everything from bribery, illegal looting of government money, profiting from the sale of alcohol, and fraud were rampant throughout Harding's inner circle. ...read more.

"Only one thing could one be sure of. [What was to come in the nineteen-thirties] would not be repetition. The stream of time often doubles on its course, but always it makes for itself a new channel" (357). Only Yesterday has stood the test of time for over 70 years, and I believe it will continue to enlighten readers for decades to come. Frederick Allen's writing tells the story like it is and paints a clear image to accompany the information he writes about. I believe the most important thing to learn from this book is to always keep yourself in check, especially in times of prosperity and joy. When times seem perfect and nothing seems to stand in your way, it is always good to assure yourself that you are secure in what you are doing. For example, if one were to play in the casinos very often and won a lot of money one day, it would not be smart to try to gain even more money by risking all that you have earned. In 1929, times seemed to be running smoothly, but beneath the surface, it was like a person blowing a balloon. The more air that was blown in, the more prosperity the nation experienced. However, that last blow popped the balloon, and America was never the same. ...read more.