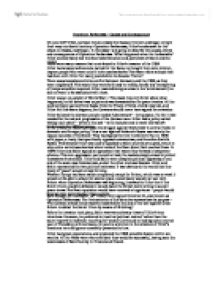 Operation Barbarossa - Causes and Consequences On June 22nd 1941, German forces crossed the Russian frontier and began to fight their way into Soviet territory. Operation Barbarossa, Hitler's codename for the attack on Russia, had begun. In this essay I am going to describe the causes, events and consequences of Operation Barbarossa. What happened when the 'unbeatable' Hitler and Germany met the sheer determination and patriotism of Stalin and the USSR? There were many reasons that contributed to Hitler's invasion of the USSR. Hitler had always harboured a hatred for the Slavs, he thought they were inferior, impure people who were only fit to be used as slaves. This was a racist attitude that had been with Hitler for many years before he became 'Fuhrer.' There was always bound to be conflict between Germany and the USSR, as they were neighbours. This meant they were both easy to invade; hardly any transporting of troops would be required. Hitler resented being so close to the 'untermensch'; he did not want to be associated with them. Hitler was an ex-soldier of World War I. This made him very bitter about what happened, he felt defeat was unjust and was devastated by the peace treaties. All the land Germany gained from Russia from the Treaty of Brest-Litovsk was lost, and Hitler felt this was a disgrace; the Germans should never have signed the armistice. Hitler believed the German people needed 'Lebensraum' - living space. ...read more.

By August, he had taken more than 2 million Soviet prisoners, destroyed 7000 aircraft and almost all their tanks. It seemed he might beat his prediction, but then, against all advice, he halted the march on Moscow. Hitler insisted Moscow was an 'unimportant target,' even though it was the centre of a highly centralised command economy, and nearly all rail links passed through the city, including those carrying vital reinforcements from the East. By late September, Hitler decided it was time to assault Moscow. By now, the defence had had time to build major defences around the city. However, this wasn't enough and by mid October the Germans were well into the city of Moscow. Then came the USSR's saviour: Winter. The German soldiers were not equipped to deal with the extreme conditions they now encountered. The soldiers began dying in large numbers, and Hitler was forced to suspend activity for the remainder of 1941. The Germans now had to defend. They had come within sight of the Kremlin, but had been stopped by nature and therefore lost their early advantage of preparedness. One of Hitler's biggest errors was turning the people of Russia against him. At first the people welcomed the Germans as liberators. They gave them supplies such as food and clothing, and provided shelter. When the Germans moved on Stalingrad it is estimated that accompanying them were about half a million Soviet volunteers. However, Hitler did not want their help because they were the Untermensch. ...read more.

Stalin became increasingly popular after the campaign, seen as the great leader whom they had followed to victory. The confidence of the masses increased, the pattern of defeats interrupted. It was hailed as a victory of the people, of Communist supremacy. Britain and the USA were very impressed with the USSR's ability. The British public were glad to see Germany suffering after the hardships of the Battle of Britain. This lead to the USSR gaining 'great power status,' and an unlikely alliance between Stalin, Churchill and Roosevelt. Russia now had to be taken seriously. Operation Barbarossa's consequences were not all good for Russia. They also suffered massive losses. The land was destroyed, partly due to Stalin's 'scorched-earth' policy. It was impossible to calculate the number of dead, but it is estimated at several million. However, Churchill was very suspicious of Stalin, and believed a powerful Russia could be just as big a threat as a powerful Germany. Churchill wanted to 'shake hands with the Russians as far to the east as possible,' to stop them gaining more land. This was exactly the opposite of Stalin's plans. He aimed to create a 'buffer zone,' so Russia would be safe from attack. The Battle of Stalingrad made all of these things possible. Up to this point, the future of the Soviet Union and of Stalin was in doubt. After the battle took place, it was only a matter of time before the Germans were driven out of Russia and pushed and pushed for another 3 brutal years until they finally met with the Western Allies at Berlin in 1945. By Hayley ...read more.