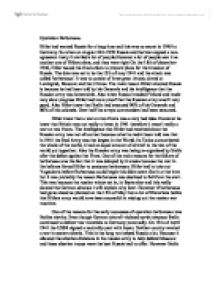 Operation Barberossa. Hitler had wanted Russia for a long time and this was no secret in 1940 in Germany.

Operation Barberossa. Hitler had wanted Russia for a lnog time and this was no secret in 1940 in Germany. So when on August 24th 1939 Russia and German signed a non-agression treaty it startled a lot of people.However a lot of people saw it as another one of Hitlers plans, and they were right On the 18th of december 1940, Hitler issued his final orders to prepare plans for the invasion of Russia. The date was set to be the 15th of may 1941 and the attack was called 'barberossa'. It was to consist of three great thrusts; aimed at Leningrad, Moscow and the Crimea. The main reason Hitler attacked Russia is because he had been told by his Generals and his intelligence that the Russian army was lamentable. Also when Russia invaded Finland and made very slow progress Hitler had more proof that the Russian army wasn't very good. Also Hitler knew that Stalin had executed 90% of his Generals and 80% of his colonels. Over half the armys commanders had been executed. Hitler knew that a war on two fronts was a very bad idea. However he knew that Britain was not really a threat in 1941 therefore it wasn't really a war on two fronts. The intelligence that Hitler had received about the Russian army was not all correct because what he hadnt been told was that in 1941 the Red Army was the largest in the World. ...read more.

The Germans continued to advance quickly, killling and capturing hundreds of thousands of Soviet troops. In August they surrounded the USSR's second city, Leningrad. Rather than slow down their march across the Soviet union, they left a force to besiege the city. At the time no0one knew that the siege would last for thirty months. On 30th september General Von Bock began his drive on Moscow with 1 million men, 1700 tanks and 950 aircraft. His forces broke the main red army resistance but, as they neared the city, they lost momentum. The weather was appalling; first mud, then bitter cold. 30 kilometres from the Soviet capital they came to a halt, exhausted and freezing.This is a good example of if barbarossa had been launched 6 weeks earlier as had been planned then it might not have failed, because this attack by Von Bock failed because the troops were freezing and they couldn't advance quickly enough.However if barbarossa had been launched when it was supposed to the panzers wouldn't have been slowed by the mud as they were and the men wouldn't have frozen to death as many of them did. Stalin ordered General Georgi Zhukov, to take command of the defense of Moscow. Hitler was not told about this by his intelligence services. By this time the snow and frost had started the roads became terrible. ...read more.

Hitler could not fail to be attracted to the idea of capturing the 'city of Stalin' (Stalingrad). The generals told him the armies in the south were not strong enough to capture both the oil fields and Stalingrad. At that point, the 6th army was moving on Stalingrad and the 4th Panzer army was poised to attack either target. Hitler used the 4th Panzer army for both goals but in the wrong order. He sent thenm south towards the oilfields where it was not needed. Then he sent it back to Stalingrad by which time the Soviet army had got just enough reinforcements in to hold the city. The 4th Panzer and the 6th armies became trapped in an enormous street-by-street battle in Stalingrad. Meanwhile, further south, the advance on the oilfields came to a halt. Had the 4th Panzer attacked Stalingrad 2 weeks sooner, it might have captured the city. Then it could have handed over to the 6th and gone south to the oilfields. Stalingrad became the most important battle of WWII in Europe. If the Germans had won, they would have been able to swing north up the volga to take Moscow and Stalin might have had to accept a humiliating peace. Britain and the USA would then have had to decide wheather to continue the war alone. Barbarossa had already gone sour by this point but stalingrad was a huge victory over the Germans for the Russians and it shaped the turned the tide of the war in our favour. ...read more.