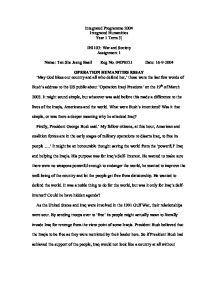 Integrated Programme 2004 Integrated Humanities Year 1 Term 3] IH1103: War and Society Assignment 1 Name: Tan She Jeeng Basil Reg No. 04IP0521 Date: 16-9-2004 OPERATION HUMANITIES ESSAY 'May God bless our country and all who defend her,' those were the last few words of Bush's address to the US public about 'Operation Iraqi Freedom' on the 19th of March 2003. It might sound simple, but whatever was said before this made a difference to the lives of the Iraqis, Americans and the world. What were Bush's intentions? Was it that simple, or was there a deeper meaning why he attacked Iraq? Firstly, President George Bush said.' My fellow citizens, at this hour, American and coalition forces are in the early stages of military operations to disarm Iraq, to free its people ....' It might be an honourable thought saving the world from the 'powerful' Iraq and helping the Iraqis. His purpose was for Iraq's Self- Interest. He wanted to make sure there were no weapons powerful enough to endanger the world, he wanted to improve the well-being of the country and let the people get free from dictatorship. He wanted to defend the world. It was a noble thing to do for the world, but was it only for Iraq's Self-interest? Could he have hidden agenda? As the United States and Iraq were involved in the 1991 Gulf War, their relationships were sour. ...read more.

It did not mean that by eliminating all the terrorists in Iraq would bring more peace to the world. Other terror groups might react violently and there might be more destruction. Instead, the US could have increase security and that would act as a psychological and physical barrier against terrorists from attacking the heavily secured areas. This would this deter the terrorists away and less harm would be done to both sides. 'Prevention is better than cure,' the US should be prepared at all times in terms of security and not give any chance to the terrorists. President Bush's argument about self-defense was valid to a certain extend, but I believed that his methods used could be changed and a war might not be necessary. Internal security should be at a high level before considering attacking Iraq. Thirdly, 'And helping Iraqis achieve a united, stable and free country will require our sustained commitment,' commended President Bush. President Bush wanted to end the Saddam Hussein government and help Iraq become a democratic, self-rule nation. President Bush was using the argument of moral justice. He sent the US troops there to eliminate the leader and wanted to stop extreme tyranny, oppression and sufferings by war, as nothing else might work. President Bush wanted to save the innocent and was using the interest of altruism. ...read more.

In addition, if you love someone, you would not want the person to be hurt. By sending so many US troops into Iraq might cause them their lives. So does President Bush love these troops? Also in his speech he said, '..., with our Army, Air Force, Navy, Coast Guard and Marines, so that we do not have to meet it later with armies of fire fighters and police and doctors...' From this, we could see that he actually wanted to prevent the civil defense to act but instead the military to do the job. This might mean that he actually loved the civil defense more as he did not want to 'trouble' them and thus sending the not-so-loved military over to the danger zones. President Bush's argument might not be valid here. As we could see that not everyone was treated equally and this might bring harm or even death to a small group that sacrificed their lives. In conclusion, the arguments that President Bush gave in regards to the Operation Iraqi Freedom were invalid most of the time. Some of the arguments looked as if they were to cover up something else. In addition, the speech he made and the actions carried out were not the same most of the time and 'actions speak louder than words'. Until now, we still did not know why did he attack Iraqi, but we knew he could have made other better choices instead of going for war. (1726 words} http://www.newyorker.com/fact/content/?040510fa_fact (article on prison) http://www.whitehouse.gov/news/releases/2003/03/print/20030319-17.html (speech) ...read more.