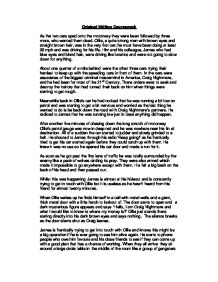 Original Writing Coursework As the two cars sped onto the motorway they were been followed by three more, who wanted them dead. Ollie, a quite strong man with brown eyes and straight brown hair, was in the very first car; he must have been doing at least 90 mph and was driving for his life. Him and his colleague, James who had blue eyes and blond hair, were driving like lunatics and were not going to slow down for anything. About one quarter of a mile behind were the other three cars trying their hardest to keep up with the speeding cars in front of them. In the cars were associates of the biggest criminal mastermind in America, Craig Nightmare, and he had been for most of the 21st Century. There orders were to seek and destroy the traitors that had turned their back on him when things were starting to get rough. Meanwhile back in Ollie's car he had noticed that he was running a bit low on petrol and was starting to get a bit nervous and worried as the last thing he wanted to do is be back down the road with Craig Nightmare's partners. ...read more.

He starts to phone people who owe him favours and his close friends to see if they can come up with a good plan that has a chance of working. When they all arrive they sit around a large circle table in the middle of the room like a group of gangsters and finally come up with the plan that they have to go to Craig Nightmare's mansion and get Ollie back right on his own territory. After days of planning where many guns and other types of weapons have been introduced to the hideout they are almost ready to start the operation. They have drawn up many plans of the buildings and the areas where the guards will be patrolling. It is a rock solid plan and it will take a lot for it to go wrong which is good if they wanted to see Ollie ever again. Back at Nightmare's mansion there was a lot of activity as he had a lot of friends round to discuss future plans of the business and what they are going to do about Ollie. When James' team arrived at the outskirts of Nightmare's property he noticed a lot of activity inside and James knew he had to rescue him tonight or else it might be too late. ...read more.

All of them just stared at each other for about thirty seconds before James kicked one of them in the face and it started a street fight. James and Ollie were trained fighters and quickly knocked the bodyguards out only leaving Craig on his own. Craig quickly then turned and ran as fast as he could in the opposite direction but he did not get far because James had taken his legs out from under him and now laid flat on his face with them standing over him. Ollie picked up a gun off the floor next to him loaded a new bullet into it and pointed it directly into Craig's face. Craig had a look of terror in his face and had gone a very pale white colour. Ollie pulled the trigger and shot him in the forehead. Blood splattered everywhere and started pouring out of the dead mans head. Ollie and James then looked at each other and Ollie said 'Do you want to go home now?' James replied 'Yes, I think I do'. They both turned around and walked out of the door and got in their getaway car and drove off slowly away from the mansion where about thirty people were lying dead and into the sunrise. ?? ?? ?? ?? ...read more.