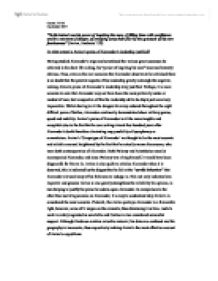 To what extent is Arrian's praise of Alexander's leadership justified?

"Noble indeed was his power of inspiring his men, of filling them with confidence and in a moment of danger, of sweeping away their fear by the spectacle of his own fearlessness" (Arrian, Anabasis 7.29) To what extent is Arrian's praise of Alexander's leadership justified? Having studied Alexander's reign and scrutinised the various great successes he achieved in his short life as king, his "power of inspiring his men" becomes blatently obvious. Thus, even on the rare occasion that Alexander deserves to be criticised there is no doubt that the positive aspects of his leadership greatly outweigh the negative, making Arrian's praise of Alexander's leadership truly justified. Perhaps, it is more accurate to note that Alexander may not have been the most politically astute or modest of men, but irrespective of this the leadership skills he displayed were truly impeccable. Whilst sharing in all the dangers his army endured throughout the eight difficult years of battles, Alexander continually demonstrated sheer military genius, speed and mobility. Arrian's praise of Alexander is all the more tangible and acceptable due to the fact that he was writing almost four hundred years after Alexander's death therefore eliminating any possibility of sycophancy or romanticism. Arrian's 'Campaigns of Alexander' are thought to be the most accurate and reliable account, heightened by the fact that he actually names his sources, who were both contemporaries of Alexander. Both Ptolemy and Aristobulus actually accompanied Alexander, and since Ptolemy was a king himself, it would have been disgraceful for him to lie. Arrian is also quick to criticise Alexander when it is deserved, this is indicated by the disgust that he felt at the "servile behaviour" that Alexander allowed many of his followers to indulge in. This not only indicates how impartial and genuine Arrian is also greatly strengthens the reliability his opinion, in turn helping to justify the praise he adorns upon Alexander. ...read more.

The marriage of the men at Susa in 324 BC, whereby, "the king was married just as the others were" (Arrian) not only highlights Alexander's ability to lead by example, but also his ability as a great leader to be careful not to disengage himself from his troops, proving that Alexander was capable of simply enjoying "the companionship of his men". Arrian points out how "Alexander was always capable of putting himself on an equal footing of equality and comradeship as his subordinates." It is consequently irrelevant whether or not Alexander led his men by his own example simply to enhance his men's ability to succeed militarily in his own "passion for glory", or whether in fact he was a simply a humble man who felt he was only as good as his soldiers could be. Irrespective, this strategy clearly highlights Alexander's military genius. Burn highlights that "no soldier in history is more undisputedly "great" than Alexander". His genius is apparent in every aspect of warfare and expedition within the eight years, Arrian comments on "his ability to seize the moment for a swift blow, before his enemy had any suspicions of what was coming was beyond praise". This technique of military genius is particularly highlighted at the Battle of the Hydaspes River 326. Alexander couldn't cross the swollen river directly as the elephants would have made his horses go mad, and so Alexander "cunningly created many false alarms until Porus was lulled into a sense of security, under the cover of darkness Alexander led a selected force...across the river." (Bradley) This exceptional ability to defeat the formidable army of King Porus in such a cunning way would have greatly motivated Alexander's army, giving them even greater faith in their leader and in turn offering justification to Arrian's appraisal of Alexander. It is understandable that when Alexander was faced with opposition or a serious threat he retaliated ruthlessly, as an absolute king he simply could not afford to tolerate opposition to his political agenda and advances, and so he had to ensure he was even more brutal than his opponents. ...read more.

Alexander is, on the other hand renowned and recalled as "Alexander the Great", as a man of great generosity and faith, as a great warrior and fighter, and most importantly as a great leader of men. The overlying quality that proves just how impeccable Alexander's leadership skills were, and accordingly justifies Arrian's expression of "ungrudging admiration" towards him, is in fact a characteristic shared by both these men, their honesty. Alexander in all his undertakings and enterprises as leader of the Hellespont was continually honest and truthful to his men, praising and rewarding them when he felt due, and scolding them when deserved. After the armies mutiny Alexander made his disappointment blatantly obvious, "when I lead you on a new venture you no longer follow me with your old spirit.,"(Arrian) Not only was Alexander always honest about his own feelings towards his men he also made no secret of the disgust he felt for himself after the murder of Cleitus, taking to his bed for three days with neither food nor drink. This display of emotion on Alexander's part proves that as a successful leader of an army Alexander valued the qualities of honesty and truth. The very fact that Arrian "admittedly, found fault with some of the things Alexander did" indicates the honesty he too maintained, and proves that his appraisal of Alexander's leadership is an honest reflection of his wish "to tell the truth as I saw it". A simple comparison of Alexander's leadership skills to those of all the other famous leaders of the world, both classical and modern, is enough to justify Arrian's appraisal and proves undoubtedly that "never in the world was there another one like him"(Arrian) and that Alexander, in the words of his very own men truly was "Alexandros Aniketos" - invincible Alexander. Leaders who now in the modern world are respected and regarded as exceptional military leaders in their own right, such as Napoleon and Caesar viewed Alexander as the bench mark in terms leadership success. ...read more.