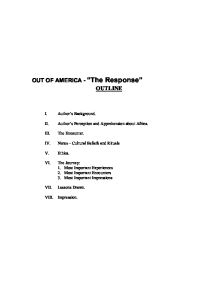 OUT OF AMERICA - "The Response" OUTLINE I. Author's Background. II. Author's Perception and Apprehension about Africa. III. The Encounter. IV. Notes - Cultural Beliefs and Rituals V. Ethics. VI. The Journey: 1. Most Important Experiences 2. Most Important Encounters 3. Most Important Impressions VII. Lessons Drawn. VIII. Impression. Keith B. Richburg, the author of "Out of America," is an American writer of African descent. Born in a Catholic middle-class family from Detroit in the 1960s, he would often go to air-conditioned theaters to see latest movies on hot summer days. Since most theater productions at the time were about African cannibalism and the greatness of Colonialism, the often found himself rooting for the British to kill the ill-behaved dark-skinned peoples. In 1967, still as a young boy, Keith witnessed ruthless Equal Rights riots on the streets of Detroit, which paralyzed most of the local shops due to its destructive nature. Shortly after that, as he was walking to school, he was dramatized by his brother's death due to an automobile's negligence to stop and yield the pedestrians. ...read more.

At his three-bedroom-house, Mr. Richburg had a maid, cook, gardener and two security guards. Through his voyages to Somalia, Richburg noticed a rather interesting cultural diversity between American people and the Africans. For instance, when a person is found dead, our western world wants to know the identity of that victim, for we need to have names to go along with faces. However, during the carnage in most African states, bodies were buried, dumped into rivers, left to rot, often uncounted, as if they were lifeless animals with no value whatsoever. Another, of many, is the actual reaction to the death of a loved one. He found many people, whose families have been exterminated, but showed no real emotion, nor despair about their loved ones' fate. They called it "In-shallah," or God's will. Africans faced many challenges. According to the author, societies on this vast continent exalted a man who had many wives and many children, even without the proper consideration for financial stability. Since good jobs were scarce, and the government was hesitant in assisting its people, crime was produced widespread. ...read more.

Just as Nazis participated in a Jewish genocide, Serbians in Bosnian extermination, so did these savages in slaughtering innocent people in Africa. He wanted to present us with another terrifying story, which would hopefully pin the western civilization down in an attempt to do something about such atrocities that were going on. But to that, he wanted to show and depict that not Africans killed people, nor blacks killed people, he wanted the reader to understand that people kill people. In addition, among the starvation, war and disease, he wanted us to learn that though the color of skin may separate the reader between the writer, our mutual interest should lie in peaceful relationship. Otherwise, the outcome is Somalia, Rwanda, etc. Before fully completing my assignment, which took a bit of time, I was certain that demanded or required readings will never be as interesting as the readings I had wanted to experience. That has changed. As I started, commencing on the Prelude, I could not take my eyes of the pages. I actually experienced Africa! I read this at home, at work and on the "N" train in between. To this day, I search over my shoulder to escape the vision of a Hutu militiaman jumping with his machete at my spine. ...read more.