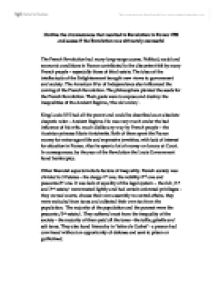 Outline the circumstances that resulted in Revolution in France 1789 and assess if the Revolution was ultimately successful.

Outline the circumstances that resulted in Revolution in France 1789 and assess if the Revolution was ultimately successful The French Revolution had many long-range causes. Political, social and economic conditions in France contributed to the discontent felt by many French people - especially those of third estate. The ideas of the intellectuals of the Enlightenment brought new views to government and society. The American War of Independence also influenced the coming of the French Revolution. The philosophers planted the seeds for the French Revolution. Their goals were to expose and destroy the inequalities of the Ancient Regime /the old order/. King Louis XVI had all the power and could be described as an absolute despotic ruler - Ancient Regime. He was very much under the bad influence of his wife, much dislike any way by French people - the Austrian princess Marie Antoinette. Both of them spent the France money for extravagant life and expensive jewelries, with lack of interest for situation in France. ...read more.

As the King had spent almost all the money of France, he tried rising more fund by general taxes, which only made people angrier and gave them the spark for Revolution. Another factor was that France lost in battle her 2 most important colonies in India and Canada and with them, their all economic benefits. Inspired of the weak control of Louis XVI on France and that the country was in front of bankrupt, several ministers, as Turgot and Necker, proposed revisions to the French taxes system so as include the nobles as taxpayers. Turgot abolished sinecures and the corvee, allowed free trade and purpose system of local council, but he was dismissed because of resistance from the provincial courts of appeal. His place was replaced from Necker, who reduced expenses of court at Versailles, reduced favours and pensions and created provincial assemblies. Unfortunately, Necker and Louis XVI sent support to America's War of Independence, as they extract revenge against the British after the humiliating Seven Years War. ...read more.

Voltaire attacked the established Church and denounced the despotism of the French Government. Rousseau spread ideas of equality and of the rights of man possessed to life, liberty and property. Montesquieu ridiculed the principles of divine right and the separation of power between the King and the Government. In consequences of them, French people were inspired to go against their King. Other cause was the inspiration of the British system, which was constitutional democracy. Increase contact with Britain caused many people to see their system as infinitely better than the French. In addition the bad weather and poor harvest caused the hungry poor people of France to go to Paris. They demanded a meeting of the State - General with the hope that something could be changed about their distress and starving. The hungry Peasants vented their anger by attacking the Bastille Prison. The Fall of Bastille at 1789, 14th July for many is known as the beginning of the French Revolution, and is celebrated today. 917 words ...read more.