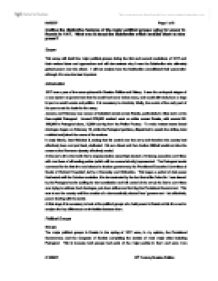 Outline the distinctive features of the major political groups vying for power in Russia in 1917 - What was it about the Bolsheviks which enabled them to take power?

Outline the distinctive features of the major political groups vying for power in Russia in 1917. What was it about the Bolsheviks which enabled them to take power? Scope This essay will detail the major political groups during the first and second revolutions of 1917 and their various ideas and approaches and will demonstrate why it was the Bolsheviks who ultimately gained power over the others. I will not analyse how the Bolsheviks consolidated their power after although it is none-the-less important. Introduction 1917 was a year of immense upheaval in Russian Politics and History. It saw the embryonic stages of a new system of government that the world had never before seen, and would ultimately have a large impact on world events and politics. It is necessary to chronicle, briefly, the events of the early part of the year to set the basis for the essay. January and February saw waves of industrial unrest across Russia, particularly in cities such as the then-capital Petrograd. Around 670,000 workersi went on strike across Russia, with around 80-100,000 in Petrograd alone, 15,000 coming from the Putilov Factory. To make matters worse bread shortages began on February 19, while the Petrograd garrison, dispatched to quash the strikes, later mutinied and joined the cause of the workers. In early March, Csar Nicholas II, seeing that his control over the army and therefore the country had effectively been compromised, abdicated. His son Alexei and then brother Mikhail would not take the crown so the Romanov dynasty effectively ended. ...read more.

It could be argued that this was reinforced by the attempted revolution in 1905 that showed to the SRs but also to the Bolsheviks under Lenin that this was indeed possible - "a conscious minority who would remould the world"xi. Why the Bolsheviks? I believe the Bolsheviks came to power in October 1917 because of a complex relationship of reasons that are all interrelated. The first major reason lies in Policies and political ambition of the Bolsheviks. I feel they had very clear ideas. Primarily it was the Bolsheviks' attitude to the provisional government and to the Soviets, particularly those of Petrograd and Moscow that allowed them the means to take power. They believed in "no support to the Provisional Government"xii and that all power should be transferred to the soviets, (despite their domination by the SRs and Mensheviks), characterised in their Revolutionary slogan 'All power to the soviets'. By seizing power of the Soviets from the Mensheviks and SRs they would possess an easy route to power as the Petrograd soviet by this stage controlled the armed forces of Petrograd allowing armed revolution against the Provisional Government. The opposite view was held by the SRs and especially the Mensheviks who I think, supported by the arguments of Kochan (1972) underrated the potential power that the soviets could possess. They failed to recognise that the Bolsheviks would use the soviets to their own ends and that the Bolshevik slogan of 'All power to the soviets' was in fact a means to gain support (away from the provisional government) ...read more.

lead to the Bolsheviks having an advantage over the other parties. In addition their clearly defined policies such as transferring power to the soviets appeared to "offer the prospect of a break with old patterns of authority"xviii thus their support, it can be argued, was based on the fact they were offering something new to the political arena which coincided perfectly with the aims of the social movementsxix and the needs of the people - summed up as 'Peace Bread and Land'. The Bolsheviks were also in the right place at the right time - their skill in using events such as the Kornilov attempted coup to gain support for their party was instrumental in gaining support for, or indifference to, their takeover. Thirdly Lenin's skill as a leader and tactician with forward thinking, particularly in the use of the soviets to gain power, was decisive. He advocated 'All power to the soviets' at a time when the Mensheviks and SRs dominated them, but safe in the knowledge that the Bolsheviks could gain a majority in the soviets in the long term. Also the formation of the Military Revolutionary Council under the guise of resisting right wing coups but then using them as an utterly loyal means to take power was in my opinion an extremely clever move. Finally, the following quote summarises my argument that it was a combination of factors that allowed the Bolsheviks to take power: "October was accomplished...by the actions of a definite party but it was...prepared by all the unfolding events hitherto... ...read more.