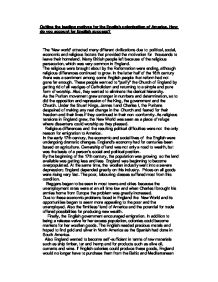 Outline the leading motives for the English colonization of America. How do you account for English success?

Outline the leading motives for the English colonization of America. How do you account for English success? The 'New world' attracted many different civilizations due to political, social, economic and religious factors that provided the motivation for thousands to leave their homeland. Many British people left because of the religious persecution, which was very common in England. The religious wars brought about by the Reformation were ending, although religious differences continued to grow. In the latter half of the 16th century there was a sentiment among some English people that reform had not gone far enough. These people wanted to "purify" the Church of England by getting rid of all vestiges of Catholicism and returning to a simple and pure form of worship. Also, they wanted to eliminate the clerical hierarchy. As the Puritan movement grew stronger in numbers and determination, so to did the opposition and repression of the King, the government and the Church. Under the Stuart Kings, James I and Charles I, the Puritans despaired of making any real change in the Church and feared for their freedom and their lives if they continued in their non-conformity. ...read more.

The English needed precious metals and hoped to find gold and silver in North America as the Spanish had done in South America. Also England wanted to become self-sufficient in terms of raw materials such as ship timber, tar and hemp and for products such as olive oil, currants and wine. If English colonies could produce these goods, England would no longer have to purchase them from the Baltic and Mediterranean countries. While the English government did not support colonization financially, it was quick to encourage private individuals and groups to establish colonies in the New World. Charters for new colonies were somewhat easily obtained and often contained concessions that were not available to Englishmen at home. In a time when emigration without royal permission was illegal, the Crown eagerly granted such permission to groups like the Puritans and for almost 150 years thereafter, allowed these colonies to grow and develop without a great deal of interference. When the English eventually colonized America they were more successful than the Spanish and French for a number of reasons. ...read more.

France had to sign the treaty of Paris, abandoning all claims to Canada and all the land east of the Mississippi. They passed Spain the Louisiana and territories around the Mississippi and New Orleans. This left Spain and England in America. However Spain was fast becoming 'the sick man of Europe'. Spain was at its highest point of power in the sixteenth century at this point they went to America to find precious stones and metals. In the seventeenth and eighteenth century Spanish power in Europe began to fade as did their power in America. The defeat of the Spanish Armada had pronounced the opening event in the history of United States. From that moment North America was open to colonization with little danger of hindrance from the Spaniards. This left the main power in the hands of the English. The reformation in England had continued through the reigns of Henry VIII, Edward VI, and, after a momentary reaction under Mary, had been completed under Elizabeth. The long reign of Elizabeth ending in 1603, brought not only internal peace, a notable revival of industries at home and activity on the sea, it also raised the British nation to a first-class power. ...read more.