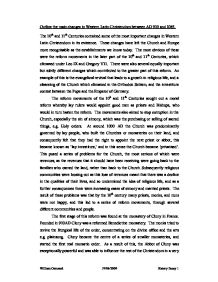 Outline the main changes in Western Latin Christendom between AD 910 and 1085. The 10th and 11th Centuries contained some of the most important changes in Western Latin Christendom in its existence. These changes have left the Church and Europe more recognisable as the establishments we know today. The most obvious of these were the reform movements in the later part of the 10th and 11th Centuries, which climaxed under Leo IX and Gregory V11. There were also several equally important but subtly different changes which contributed to the greater part of this reform. An example of this is the evangelical revival that leads to a growth in religious life, and a cleansing of the Church which climaxed in the Orthodox Schism, and the investiture contest between the Pope and the Emperor of Germany. The reform movements of the 10h and 11th Centuries sought out a moral reform whereby lay rulers would appoint good men as priests and Bishops, who would in turn hasten the reform. The movements also aimed to stop corruption in the Church, especially the sin of simony, which was the purchasing or selling of sacred things, e.g. Holy orders. At around 1000 AD the Church was predominantly governed by lay people, who built the Churches or monasteries on their land, and consequently felt that they had the right to appoint the next priest or abbot, this became known as 'lay investiture,' and in this sense the Church became 'privatised'. ...read more.

This worked because they could reinforce the reform, as Henry was able to back up the Popes decrees in his own kingdom. In 1046 however, there was a new problem, and at the Synod of Sutri the new Emperor Henry III had to resolve another Papal dispute, this time he appointed his own Pope Clement II, Clement however dies quickly and Henry appoints Leo IX. Leo had a strong personality and lots of energy; he is convinced that God sent him to route out simony. He held 11 reforming councils in 5 Years, the first, which was held in 1949 in Rome aimed to Route out simony. Another held in Reims asked 20 Bishops and 40 Abbots to declare whether they were guilty of simony. All the bishops who didn't turn up were deposed. Several other reforming councils were held e.g. At Poitiers they agree that Priests and deacons should not live with women, and at Ingelheim they agreed that laymen could not expel or appoint clergy. Leo IX however had a serious problem in South Italy; the Normans had invaded and were encroaching into Papal land. Leo IX planned to stand up to them but at the battle of Civilate in 1053 he suffers a humiliating defeat and was captured, he is finally released; however he is a broken man. In 1054 he holds another reforming council in South Italy; this however causes an argument with the Byzantines who also owned a large area of Southern Italy. ...read more.

The result of this reform was clear, within society there was a shift towards the Church, and the attack on the 'sacred kingship' was successful. The prestige of the Papacy increased dramatically, however the papal victory appeared more complete within the Church. The pope made a series of declarations known as the dictatus papae which outlined the main development of the Church over the next two centuries. The Reformers made a new vision of the Church in which the Clergy were separated from the hierarchal chain that stretched from God to humanity. The reform however was not just for Kings and Popes, many ordinary citizens were forced to make religious choices, which were made more difficult in that for as long as people could remember anointed Kings had ruled the church, but were held in the balance, because the Pope had a more powerful theological argument based on Canon Law. In the end the reforms added a new level of tension and a new dimension of a new level of life which we can still see in Christendom today. The position of the Pope became much more similar to the view we have of him today, and the Church got rid of the idea of Sacred Kingship which would be brought up in Britain at a later date under Henry VIII. The Reformers had successfully brought the Church out of a difficult moral situation and created a modern yet classical opinion of the Church, and started many traditions which are still around today. ...read more.