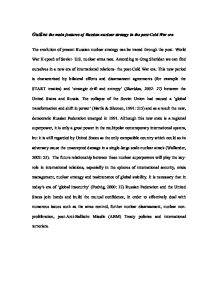 Outline the main features of Russian nuclear strategy in the post-Cold War era The evolution of present Russian nuclear strategy can be traced through the post- World War II epoch of Soviet- U.S. nuclear arms race. According to Greg Sheridan we can find ourselves in a new era of international relations- the post-Cold War era. This new period is characterised by bilateral efforts and disarmament agreements (for example the START treaties) and 'strategic drift and entropy' (Sheridan, 2002: 27) between the United States and Russia. The collapse of the Soviet Union had caused a 'global transformation and shift in power' (Hartle & Sikonen, 1991: 215) and as a result the new, democratic Russian Federation emerged in 1991. Although this new state is a regional superpower, it is only a great power in the multipolar contemporary international system, but it is still regarded by United States as the only compatible country which could as its adversary cause the unaccepted damage in a single-large scale nuclear attack (Wallander, 2002: 25). The future relationship between these nuclear superpowers will play the key-role in international relations, especially in the spheres of international security, crisis management, nuclear strategy and maintenance of global stability. It is necessary that in today's era of 'global insecurity' (Podvig, 2000: 12) Russian Federation and the United States join hands and build the mutual confidence, in order to effectively deal with numerous issues such as the arms control, further nuclear disarmament, nuclear non-proliferation, post-Anti-Ballistic Missile (ABM) ...read more.

Treaty. Despite much criticism it receives, START-II Treaty overall contributes to strategic stability and reduces both countries' capabilities to make explicitly damaging counter-force nuclear strike. (Berry, 1987: 37). It also strengthens the nuclear non-proliferation regime, reduces the risk of accidental nuclear conflict and aids in confidence building in Russo-American relationship. For example, the Black Brant XII incident occurred in 1995, where Norwegian-U.S. joint research rocket was mistaken by Russia as a nuclear attack. Yeltsin did not act immediately, primarily because Russia was guaranteed some form of partnership and security by START Treaties and it felt confident in its relationship to Washington. Thus the retaliatory counter-attack was not carried out, and the breakout of the accidental nuclear war was avoided (Dvorkin 1999: 2). The issue of Russian New Military Doctrine followed START-II Treaty in the same year (1993). It concentrated more on internal than external threats to Federation's security. The concept 'Kontzeptzia' and the main tenants 'Osnovnye Polozhena' gave priority to economic progress and elaborated national interests of Russia as regional superpower, great power and nuclear superpower (Dvorkin, 1999: 5). This doctrine allowed Russia to use nuclear weapons first in an attack by a nuclear weapon state and any of its allies, but stressed the internal threats as the major threats to national security. Russian New Military Doctrine was the expansion of its post-Cold War nuclear strategy. ...read more.

Despite the claims by Russian military and political leadership that American NMD is currently not technically possible, there is a difference between said and done. Russian nuclear strategy took another turn, and instead of mutual efforts towards nuclear disarmament, Russia is now working towards modernisation of its nuclear capabilities and nuclear weapons. There is a current deadlock on US-Russian agreements in terms of further nuclear disarmament. These nuclear giants are still operating within the old army control negotiations framework, which provides few incentives for solving the problems that exist today. Although Russian nuclear strategy in the post-Cold War era was evolving through mutual treaties to build-up more confidence with United States, the underlying political issues did not resolve the controversies. The failure of United States and Russia to make a better progress towards nuclear disarmament and end nuclear testing, cleared the ground for India and Pakistan to engage in a new nuclear arms race (Hartle & Sikonen, 1991:101). Many analysts urge all nuclear countries, especially Russia and United States to collaborate towards a further nuclear disarmament, better arms control and prevent international terrorist organizations to reach nuclear materials. Russian post-Cold War nuclear strategy contributed to overall reduction of nuclear weapons (from 60.000 to 35.000) (Dvorkin, 1999: 17), however the risk of accidental nuclear war is still real and the threat of nuclear proliferation is greater than ever. ...read more.