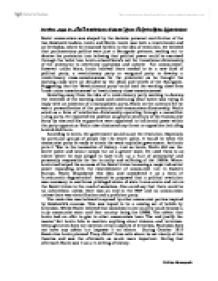 Outline ways in which Stalinism deviated from the principles of Leninism

Outline ways in which Stalinism deviated from the principles of Leninism Soviet communism was shaped by the decisive personal contribution of the two Bolshevik leaders, Lenin and Stalin. Lenin was both a revolutionist and an Orthodox, where he remained faithful to the idea of revolution. He believed that parliamentary politics were just a Bourgeois pretence, seeking out to deceive the proletariat into believing that political power could be exercised through the ballot box. Lenin echoed Marx's call for transitional dictatorship of the proletariat to overthrow capitalism and achieve 'full communism'. However unlike Marx, Lenin believed there needed to be a new kind of political party, a revolutionary party or vanguard party to develop a revolutionary class-consciousness for the proletariat as he thought the working class were all deluded by the ideas and beliefs of the Bourgeois. ...read more.

According to Lenin, the government would cause the revolution. Especially by particular groups of people like the secret police. It would be when the communist party is ready to attack the weak capitalist government. As Lenin puts it 'War is the locomotive of history. Just as Lenin, Stalin did use the secret police and labour camps but on a greater scale. He used them to an extent where he was alleged to have built up a 'cult of personality' and personally responsible for the brutality and suffering of the 1930's. Where Lenin had helped the success of the Soviet Union becoming a major industrial power expanding with the establishment of communist rule in Eastern Europe, Stalin dilapidated this idea and considered it as a form of 'bureaucratic degeneration'. ...read more.

During October 1917 Revolution Lenin planned 'Coup d'etait' from exile where he set clearly all his theories and saw the aftermath as much more important. During that aftermath Stalin saw it as a re-writing of history. The central belief of Euro communism was rejection of the Leninist idea of revolution in favour of a gradual and peaceful transition towards socialism. Euro communist principles departed fundamentally from those of Orthodox Marxism-Leninism by accepting the principle of political pluralism and relinquishing their ambition to establish one-party communist rule. Lenin understood historical materialism creating a classless society but taking time for this process to further a do. Stalin conversely does not believe in historical materialism, instead he believes in Dialectic materialism. Where one can remove class antagonism but not class division i.e. Terrorism. Politics Homework ...read more.