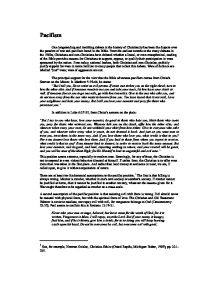 Pacifism One longstanding and troubling debate in the history of Christianity has been the dispute over the paradox of war and pacifism found in the Bible. From the earliest records to the many debates in the 1980s, Christians and non-Christians have debated whether a literal, or even metaphorical, reading of the Bible provides reasons for Christians to support, oppose, or qualify their participation in wars sponsored by the nation. Even today, national leaders, both Christian and non-Christian, publicly justify support for wars in terms familiar to many people that reflect this debate. Wars of defence are labelled "just" wars; wars of aggression are not. The principal support for the view that the Bible advocates pacifism comes from Christ's Sermon on the Mount. In Matthew 5:39-44, he states: "But I tell you, Do to resist an evil person. If some one strikes you on the right cheek, turn to him the other also. And if someone wants to sue you and take your tunic, let him have your cloak as well. If someone forces you to go one mile, go with him two miles. Give to the one who asks you, and do not turn away from the one who wants to borrow from you. ...read more.

And they utterly destroyed everything in the city, both man and woman, young and old, and ox and sheep and donkey, with the edge of the sword. And they burned the city with fire, and all that was in it. Only the silver and gold and articles of bronze and iron, they put into the treasury of the house of the Lord. Then Joshua made them take an oath at that time, saying cursed before the Lord is the man who rises up and builds this city Jericho; with the loss of his first-born he shall lay its foundation, and with the loss of his youngest son he shall set up its gates. So the Lord was with Joshua, and his fame was in all the land. In this case, not only was everything except the riches destroyed, but a curse was put on the city so that no one would attempt to rebuild it NEED TO WRITE MORE ON THIS WEIRD IDEA OF TOTAL WAR PERHAPHS OR AT LEAST A SUM UP PARAGRAPGH. Historically, Christians have adopted many positions on war. However, three broad positions encompass the range of choices made over the millennia: (1) ...read more.

preserving the peace.NUCLEAR WAR A third alternative in the resolution of the paradox that Christians have attempted (primarily in the middle ages) has been the crusade. The crusade is fundamentally different from the above two positions. According to one scholar: A crusade was to be fought under the authority of the church or of a charismatic religious leader, but not by the state itself, although it might potentially be conducted by a theocratic state. The goal of the crusade was not to be limited to restoring peace or preserving justice; the goal instead was to uphold, preserve, or expand the dominion of the church itself against the threats, real or imagined, of its enemies.5 1 See, for example, Norman Geisler, Christian Ethics (Grand Rapids, Michigan: Baker, 1989), pp. 221-225. 2 Cited in Robert Culver, "Between War and Peace: Old Debate in a New Age," Christianity Today, October 24, 1980, p. 30. 3 Ronald A. Wells, ed., "Introduction," The Wars of America: Christian Views (Grand Rapids, Michigan: William B. Eerdmans, 1981), p. 8. 4 Paul Ramsey, War and the Christian Conscience: How Shall Modern War Be Conducted Justly? (North Carolina: Duke University Press, 1961), p. 115. 5 Wells, op. cit., pp. 8-9. ?? ?? ?? ?? ...read more.