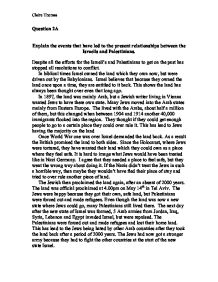 Question 2A Explain the events that have led to the present relationships between the Israelis and Palestinians. Despite all the efforts for the Israeli's and Palestinians to get on the past has stopped all resolutions to conflict. In biblical times Israel owned the land which they own now, but were driven out by the Babylonians. Israel believes that because they owned the land once upon a time, they are entitled to it back. This shows the land has always been thought over even that long ago. In 1897, the land was mainly Arab, but a Jewish writer living in Vienna wanted Jews to have there own state. Many Jews moved into the Arab states mainly from Eastern Europe. The lived with the Arabs, about half a million of them, but this changed when between 1904 and 1914 another 40,000 immigrants flocked into the region. ...read more.

The Jews were happy because they got their own, safe land, but Palestinians were forced out and made refugees. Even though the land was now a new state where Jews could go, many Palestinians still lived there. The next day after the new state of Israel was formed, 5 Arab armies from Jordan, Iraq, Syria, Lebanon and Egypt invaded Israel, but were repulsed. The Palestinians were forced out and made refugees and lost their home land. This has lead to the Jews being hated by other Arab countries after they took the land back after a period of 2000 years. The Jews had now got a stronger army because they had to fight the other countries at the start of the new state Israel. The 1967 war a massive and important part, as it created mounting tensions between Israel and other Arab countries in the six days in which the war lasted. ...read more.

The first intifada between 1987 and 1992 was much less violent than the present one that started in September 2000 and is on-going. This is because the Israeli army had got bigger and has been a bigger demand for land. Several attempts to make peace happened in the 1990's including the famous handshake in 1995. This lead to the sides getting more power hungry over land as they would not accept any blame what so ever. This has carried into the present where both sides still won't take any responsibility. Since last year the Israeli's have pulled out of Gaza in summer 2005. Israel removed all of it settlers. Palestinians should be happy that they have a place they can call home but the border is still heavily controlled by the Israeli's with blockages and curfews. Israel gave back the Gaza Strip because they have still more control than the Palestinians. Many Israeli's were upset because they were being kicked out of the Gaza Strip after a period of just over 60 years. ?? ?? ?? ?? Claire Thomas ...read more.