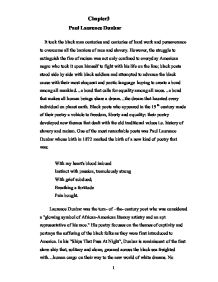 Chapter3 Paul Laurence Dunbar It took the black man centuries and centuries of hard work and perseverance to overcome all the barriers of race and slavery. However, the struggle to extinguish the fire of racism was not only confined to everyday American negro who took it upon himself to fight with his life on the line; black poets stood side by side with black soldiers and attempted to advance the black cause with their most eloquent and poetic language hoping to create a bond among all mankind...a bond that calls for equality among all races...a bond that makes all human beings share a dream...the dream that haunted every individual on planet earth. Black poets who appeared in the 19th century made of their poetry a vehicle to freedom, liberty and equality: their poetry developed new themes that dealt with the old traditional values i.e. history of slavery and racism. One of the most remarkable poets was Paul Laurence Dunbar whose birth in 1872 marked the birth of a new kind of poetry that was: With my heart's blood imbued Instinct with passion, tremulously strong With grief subdued; Breathing a fortitude Pain bought. ...read more.

To go back to "Ethiopia", to cling to their own roots is the only way for them to know who they really are, and to feel proud of their own heritage and their own "color" that had for centuries separated them from the "light of the day". Even though blacks were degraded and manipulated by the white power, even though the "pangs of slavery" crushed every bone of their bodies, even though their own culture was obliterated and almost forgotten, yet Dunbar encourages his black folks to establish their own sense of identity and to Be proud, my race, in mind and body Thy name is writ on Glory's scroll In characters of fire. Dunbar's poetry focuses on every American black man who, due to centuries of abusiveness and maltreatment, was left with a broken mentality that rendered him psychologically deranged and mentally alienated. In his "The Paradox", Dunbar exposes the dilemma of all Africans who are no longer sure of their own identity, but who are left to suffer and moan alone on the shore of life: I am the mother of sorrows I am the ender of grief I am the bud and the blossom I am the late-falling leaf. ...read more.

The poem is read as a "cry against slavery", a cry of the human soul, heart and mind to break loose from the rotten and chaotic atmosphere that smothered the free bird within every single human being: "Sympathy" is a heartfelt cry of the poet who finds himself imprisoned amid traditions and prejudices he feels powerless to destroy. In his poem, Dunbar marks an essential shift from the "imitation of the European models and toward a strong poetic voice of his own. Yet he displays his keen awareness of the limitations imposed on his culture. Dunbar's wife explained in the A.M.E Review in 1914 that The iron grating of the book stacks in the Library of Congress suggested to him the bars of the bird's cage. June and July days are hot. All out of doors called and the trees of the shaded streets of Washington were tantalizingly suggestive of his beloved streams and fields. The torrid sun poured its rays down into the courtyard of the library and heated the iron grilling of the book stacks until they were like prison bars in more senses than one. The dry dust of the dry books...rasped sharply in his hot throat, and he understood how the bird felt when it beats its wings against its cage. ?? ?? ?? ?? 1 ...read more.