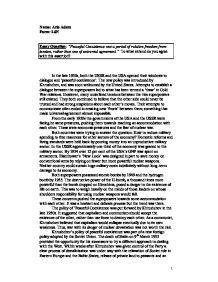 &quot;Peaceful Coexistence was a period of relative freedom from tension, rather than one of universal agreement.&quot; To what extend do you agree with this assertion?

Name: Arie Adam Form: L6N Essay Question: "Peaceful Coexistence was a period of relative freedom from tension, rather than one of universal agreement." To what extend do you agree with this assertion? In the late 1950s, both the USSR and the USA opened their windows to dialogue and 'peaceful coexistence'. The new policy was introduced by Khrushchev, and was soon welcomed by the United States. Attempts to establish a dialogue between the superpowers led to what has been termed a 'thaw' in Cold War relations. However, many underlined tensions between the two superpowers still existed. They both continued to believe that the other side could never be trusted and had strong suspicions about each other's moves. Their attempts to communicate often ended in creating new 'frosts' between them; something that made universal agreement almost impossible. From the early 1950s the governments of the USA and the USSR were facing he same pressures, pushing them towards reaching an accommodation with each other. These were economic pressures and the fear of nuclear war. Both countries were trying to answer the question: How to reduce military spending to free resources for other sectors of the economy? Domestic reforms and living standards were held back by pouring money into an unproductive military sector. ...read more.

This was dramatically expressed in the Domino Theory of April 1954: 'you have a row of dominoes set up and you knock over the first one...". However, the successful test of the first Soviet H-bomb in August 1953, a peace settlement in Indochina in July 1954 and Churchill's continued insistence encouraged Eisenhower to explore peaceful coexistence. Eisenhower had spoken of the need for Soviet deeds not words and in April 1955 the Soviet Union proposed a formal peace treaty with Austria. This was successful and led to full independence for Austria on 15th May 1955. In a further success of peaceful coexistence Khrushchev and Bulganin visited Yugoslavia in May 1955, and despite a very cold reception endorsed Tito's leadership and ended years of hostility. By spring 1955 peaceful coexistence had significantly reduced East-West tension and the Soviet Union proposed a summit. The Geneva Summit of June 1955 was the first meeting of Allied leaders since Potsdam. The key issue for the Soviet Union and the ultimate test of peaceful coexistence was the future of Germany. Marshall Aid had revitalised West Berlin and West Germany had been rearmed and admitted to NATO in May 1955. However, the West refused Soviet requests for the recognition of East Germany and rejected proposals for a unified but disarmed Germany. ...read more.

However, Khrushchev blundered at a press conference when he boasted, 'We will bury you'. He was speaking in the context of economic competition and probably being a little sarcastic, but his words rekindled the US sense of threat. During the following years, tensions increased between China and the Soviet Union, as Mao Zeodong was increasingly critical of peaceful coexistence. In July 1960 the dispute with China burst into the open as Khrushchev condemned Chinese communism following Mao Zedong's complaint that 'peaceful coexistence was a bourgeois pacific concept'. Khrushchev never trusted China, and in a bizarre adoption of US rhetoric accused Chinese of a 'desire to rule the world'. In my opinion, agreement between the superpowers was not possible during the Late 1950s. Although they both made efforts to achieve peaceful coexistence, the fear of each other did not let then succeed. Also, the advance of communism in China threatened the United States and events in Korea and Vietnam justified the 'Domino Theory'. This was made worst by Mao's criticism of peaceful coexistence. The Soviet Union was willing to loosen up its foreign policy in Eastern Europe. Yet, this was limited as shown in the events in Poland and USSR's attitude towards the Hungarian Rising in 1956. I believe that peaceful coexistence was a period of relative freedom from tension, however not a universal agreement. The West lost a great opportunity to end the War! 4 ...read more.