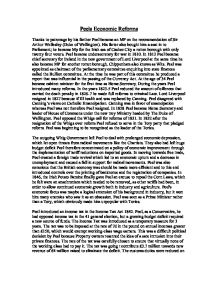 Peels Reforms an his main achievements

Peels Economic Reforms Thanks to patronage by his farther Peel became an MP on the recommendation of Sir Arthur Wellesley (Duke of Wellington). His farter also bought him a seat in to Parliament; he became Mp for the Irish sea of Cashec City a rotten borough with only twenty four voters. Peel became undersecretary for war in 1810. In 1812 Peel became chief secretary for Ireland in the new government of Lord Liverpool at the same time he also became MP for another rotten borough, Chippenham also knows as Wits. Peel was appointed as chairman of the parliamentary committee enquiring into state finances called the Bullion committee. At the time he was part of this committee he produced a report that was influential in the passing of the Currency Act. At the age of 34 Peel became cabinet minister for the first time as Home Secretary. During the years Peel introduced many reforms. In the years 1823-5 Peel reduced the amount of offences that carried the death penalty in 1826-7 he made full reforms to criminal Law. ...read more.

Peel was also conscious that the British economy was should be made more efficient and to this end introduced controls over the printing of banknotes and the registration of companies. In 1846, the Irish Potato Famine finally gave Peel an excuse to repeal the Corn Laws, which he felt were an anachronism which needed to be removed, as other tariffs had been, in order to allow continued economic growth both in industry and agriculture. Peel's economic focus was maybe a logical extension of his background in industry, but it won him many enemies who saw it as an obsession. Peel was seen as a Prime Minister rather than a Tory, which obviously made him unpopular with Tories. Peel introduced an income tax in the Income Tax Act 1842. Peel, as a Conservative, he had opposed income tax in the 41 general election, but a growing budget deficit required a new source of funds. The income Tax was introduced as a temporary measure for 3 years. ...read more.

The country was also economically instable because people who had money could not put it in banks as they did not trust them. Peel also embedded more faith into the banking system because banks had to be registered and legal to trade this was known as The Companies Act aimed to prevent 'reckless speculation' and to prevent the establishment of dubious companies by making it compulsory for all companies to be registered officially. The companies also had to issue prospectuses and publish accounts regularly. By peel introducing the income tax he also gave things back like putting faith in banking. The Bank Charter Act 1844 restricted the powers of British banks and gave exclusive note-issuing powers to the central Bank of England. Under the act, no bank other than the Bank of England could issue new banknotes, at the same time the Bank of England were restricted to issue new banknotes only when these were 100% backed by gold. The act restricted the supply of new notes reaching circulation, but also gave the Bank of England an effective monopoly on the printing of new notes. ...read more.