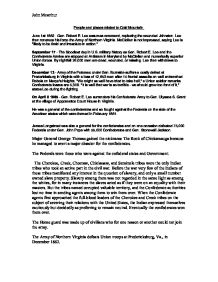 People and places related to Cold Mountain. June 1st 1862. Gen. Robert E. Lee assumes command, replacing the wounded Johnston. Lee then renames his force the Army of Northern Virginia. McClellan is not impressed, saying Lee is "likely to be timid and irresolute in action." September 17 - The bloodiest day in U.S. military history as Gen. Robert E. Lee and the Confederate Armies are stopped at Antietam in Maryland by McClellan and numerically superior Union forces. By nightfall 26,000 men are dead, wounded, or missing. Lee then withdraws to Virginia. December 13 - Army of the Potomac under Gen. Burnside suffers a costly defeat at Fredericksburg in Virginia with a loss of 12,653 men after 14 frontal assaults on well entrenched Rebels on Marye's Heights. ...read more.

Stonewall Jackson. Major General George Thomas gained the nickname The Rock of Chickamauga because he managed to avert a major disaster for the confederates. The Federals were those who were against the cofederal states and Government. The Cherokee, Creek, Choctaw, Chickasaw, and Seminole tribes were the only Indian tribes who took an active part in the civil war. Before the war very few of the Indians of these tribes manifested any interest in the question of slavery, and only a small number owned slave property. Slavery among them was not regarded in the same light as among the whites, for in many instances the slaves acted as if they were on an equality with their masters. ...read more.

The battle took place on Wednesday, September 17, 1862, just 18 days after the Confederate victory at Second Manassas, 40 miles to the southeast in Virginia. This was the sixth and last of the Seven Days' Battles. On July 1, 1862, Gen. Robert E. Lee launched a series of disjointed assaults on the nearly impregnable Union position on Malvern Hill. The Confederates suffered more than 5,300 casualties without gaining an inch of ground. Despite his victory, McClellan withdrew to entrench at Harrison's Landing on James River, where his army was protected by gunboats. This ended the Peninsula Campaign. When McClellan's army ceased to threaten Richmond, Lee sent Jackson to operate against Maj. Gen. John Pope's army along the Rapidan River, thus initiating the Northern Virginia Campaign. ?? ?? ?? ?? John Mcarthur ...read more.