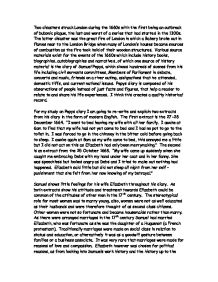 Pepy's record of the bubonic plague and the great fire of London.

Two disasters struck London during the 1660s with the first being an outbreak of bubonic plague, the last and worst of a series that had started in the 1300s. The latter disaster was the great fire of London in which a Bakery broke out in flames near to the London Bridge when many of London's houses became sources of combustion as the fire took hold of their wooden structures. Various source materials exist for the events of the 1660s which include history books, biographies, autobiographies and narratives, of which one source of history material is the diary of Samuel Pepys, which shows hundreds of scenes from his life including civil servants committees, Members of Parliament in debate, concerts and music, friends on a river outing, assignations that he attended, domestic tiffs, and current national issues. Pepys diary is composed of his observations of people instead of just facts and figures, that help a reader to relate to and share his life experiences. I think this creates a quality historical record. For my study on Pepys diary I am going to re-write and explain two extracts from his diary in the form of modern English. ...read more.

It was very rare that marriages were made for reasons of love and compassion. Elizabeth however was chosen for political reasons, as from looking into Samuels work history and the history up to the 1660's he could have married Elizabeth to help keep peace and promote integration between the English and French in England. As Samuel was a figure of authority and often associated with the King and Duke he would feel that this was an important role. Throughout Samuels diary it is apparent how little feelings he has for Elizabeth although he hides his perjury from her. Samuel also participated in arranging suitable marriages which he included details of arranging the marriage of Jemima and Philip in his diary. The object of this marriage was partly financial but otherwise made as a cement of a politico-administrative alliance since both fathers were now very high officials in the admiralty. Samuel had been well educated to become a qualified solicitor but due to events in his early career and his family, he worked with his relative Edward Mountagu. ...read more.

For the parts that I have re-written from Pepys diary I have changed many words such as vexed to annoyed, mirth to merrymaking, folks to parents, sacrament to self-punishment. At first my interpretation for the sentence "I was with my main in her cunny", was that a main in modern English was manhood or penis, as my reasoning for this is that I thought that the word main might have been a word used to describe manhood or a male's feature, although my ideas could deferent to others. I know that cunny is an older term for the modern word fanny. The detailed interpretation in my own understanding for this was "I was with my penis in her fanny." But since looking into this in more detail, I have discovered that this single word in the middle of an old English sentence was the French word for hand. Samuel would have wrote this to stop prying eyes from his wife Elizabeth. As I have previously mentioned he tried to hide his perjury from her and often doing so by the use of other languages. Elizabeth was not as well educated as Samuel was, so may not of been able to translate this part in his diary. Tina Fountain ...read more.