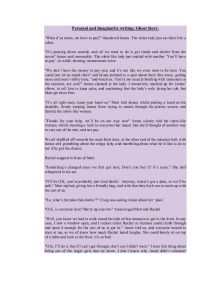 Personal and Imaginative writing: Ghost Story. "What d'ya mean, we have to pay?" thundered James. The ticket lady just sat there like a robot. "It's pouring down outside, and all we want to do is get inside and shelter from the storm" James said reasonably. The robot-like lady just replied with another 'You'll have to pay', in a dull, droning, monotonous voice. "We don't have the money to pay you, and it's not like we even want to be here. You could just let us stand there" and James pointed to a spot about three feet away, getting more and more visibly irate, "and watch us. You're not exactly bustling with customers at the moment, are you?" James shouted at the lady. I tentatively reached up for James' elbow, to tell him to keep calm, and explaining that the lady's only doing her job, but Matt got there first. "It's all right mate, keep your head on." Matt told James, whilst putting a hand on his shoulder, firmly keeping James from trying to smash through the plastic screen, and throttle the robot-like woman. "Thanks for your help, we'll be on our way now" Annie calmly told the robot-like woman, whilst shooting a look to everyone that meant that she'd thought of another way to stay out of the rain, and not pay. We all shuffled off towards the main front door, at the other end of the entrance hall, with James still grumbling about the stingy lady, and mumbling about what he'd like to do to her if he got the chance. Rachel stopped in front of Matt. "Something's changed since we first got here. Don't you feel it? It's scary." She half whispered in his ear. "It'll be O.K, you're probably just tired darlin'. Anyway, Annie's got a plan, so we'll be safe." Matt replied, giving her a friendly hug, and with that they both ran to catch up with the rest of us. ...read more.

I gotta go and open the door for her. I'll be back with her in a minute." And with that Matt ran out of the room. Our conversation had only lasted half a minute at most, but already the flames had become another three or four feet wide. "JAMES, there's nothing you can do to stop it. RUN THROUGH NOW," I shouted at the top of my voice "before it's too late." I added on under my breath. Seeing no reaction, I repeated it again and again until it got through to him. Having heard my voice, James spun around, saw what I meant, and prepared to run through the burning wall of fire. Just as he reached this side, I jerked round to see where Annie and Craig were, as I couldn't hear Craig's voice soothing Annie any more. They were by the door, waiting for James and me to join them. I looked over my shoulder, saw that James was safely through, only a couple of minor burns on his arm and ear I noted, pointed at us, then the doorway where Craig and Annie had just been. We ran out of that bedroom. * * * There should be some stairs around here somewhere, Matt thought to himself. He had just left me and the others in the blazing bedroom. Matt found the stairs after a quick search and began to descend them. Just before he got to the bottom of the stairs leading to the second floor, he heard a voice coming ever closer to him, saying, "I must get to them before anything much worse happens to them, the poor things. They must be scared out of their wits with that fire going on". Having hidden in a darker part of the shadows that seemed to cover the stairway like a second carpet, Matt poked his head out and around the blackened corner, to see where the person had gone too, but he couldn't see anyone at all. ...read more.

Just as he was about to turn around and try to meet up with us and then come back so that we could all help him to look for Rachel, he felt the temperature get abruptly hotter. When he did turn 'round, he saw that there were two other corridors apart from the one that he'd ran down converging on the now shattered door. From the one on the left, he could hear the unearthly voices, the corridor in the middle was where the fire was raging unmercilesly, and the last corridor, the one to his right, was the one which we were running along. * * * "How long until we meet Matt?" Annie panted out to the others when we'd stopped. "Just a couple of corridors I think" James replied hastily "so lets go" and with that we were off again. * * * The only way out's the main entrance now, Matt realised. CRASH! Thunder rolled over the whole mansion now, and as soon as that happened, he saw Rachel hobbling along with her make-shift crutch. We're all together now, and with that, the ghost-like things entered the reception area, me, James, Annie and Craig ran into the room with the fire hot on our heels, and goggled at everything. "OVER HERE!" Matt shouted. We all joined together, and destroyed the doorway to the abominable place. Matt picked up Rachel and ran. When we'd all got together, we'd noticed a stack of gas cylinders that were in the direct line of the fire, so we knew that sooner or later, the fire would get to them and the whole place would go up in flames. When we were about half a mile away, on the top of a surrounding hill, we heard an explosion that sounded like the whole world was being ripped apart. As if we were one, we turned around and saw the charred remains of the building. We never did find out what the other-worldly beings were fighting over, or who they really were. None of us ever speak of it any more. ...read more.