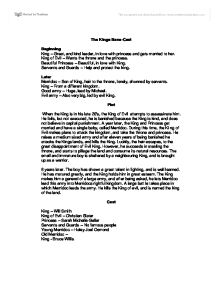 Planning a Film: The Kings Bane-Cast

The Kings Bane-Cast Beginning King - Great, and kind leader, in love with princess and gets married to her. King of Evil - Wants the throne and the princess. Beautiful Princess - Beautiful, in love with King. Servants and Guards - Help and protect the king. Later Merridoc - Son of King, heir to the throne, lonely, shunned by servants. King - From a different kingdom. Good army - Huge, lead by Michael. Evil army - Also very big, led by evil King. Plot When the King is in his late 20's, the King of Evil attempts to assassinate him. He fails, but not executed, he is banished because the King is kind, and does not believe in capital punishment. A year later, the King and Princess get married and have a single baby, called Merridoc. During this time, the King of Evil makes plans to attack the kingdom, and take the throne and princess. ...read more.

- Haley Joel Osmond Old Merridoc - King - Bruce Willis Sound Track John Williams - Orchestra music especially composed Train - Drops of Jupiter Enya - Music especially composed Poster There are some things in this poster worth an additional mention. When making the title, I wanted to make it look bloody, and war like, by using effects like smear, blur, and soften, I could give I a fading look. I also used these effects on the edges of the picture, to make sure it does not stick out more than the title. However, the words 'In Cinemas Now' were allowed to, because they emphasise the fact that this is a new film. I used the actor's names as a selling point for the film, as other adverts have done in the past. I also used a central recommendation to make people think this is a film they want to see. ...read more.

End of scene Scene 2 Set in a small hall beautifully decorated. King - You decide to disturb our peace again then. You see the King standing tall, wearing a coat of arms and wearing a sword. King - The penalty for this here is death. However, I am willing to let you go I hope some good comes from this, but my heart tells me it will not. You will be banished out of my kingdom forever, unless you come in by force. Out. The assailant is lead out under the watchful, and thoughtful, eye of the King. End of scene Story Board - Opening Scene 1 Shot No. Vision Shot description/Camera Movement Sound 1 Black screen, nothing visible. Footsteps, heavy breathing. Gives it a strange atmosphere. 2 Through the eyes of an attacker, holding a knife, about to turn the corners. Running footsteps, very quite and eerie. 3 Sudden abrupt halt, two guards standing in the way, obviously they knew about the attack. Loud, but subtle flash sound. Used to make the audience jump a bit. ...read more.