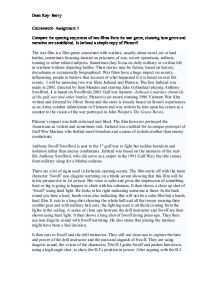 Coursework- Assignment 1 Compare the opening sequences of two films from the war genre, showing how genre and narrative are established. Is Jarhead a simple copy of Platoon? The war film is a film genre concerned with warfare, usually about naval, air or land battles, sometimes focusing instead on prisoners of war, covert operations, military training or other related subjects. Sometimes they focus on daily military or civilian life in wartime without depicting battles. Their stories may be fiction, based on history, docudrama or occasionally biographical. War films have a huge impact on society, influencing people to believe that account of what happened if it is based on real life events. I will be assessing two war films Jarhead and Platoon. The first Jarhead was made in 2005, directed by Sam Mendes and starring Jake Gyllenhaal playing Anthony Swofford, it is based on Swoffords 2003 Gulf war memoir- Jarhead a marines chronicle of the gulf war and other battles. Platoon is an award winning 1986 Vietnam War film written and directed by Oliver Stone and the story is loosely based on Stone's experiences as an Army combat infantryman in Vietnam and was written by him upon his return as a counter to the vision of the war portrayed in John Wayne's The Green Berets. ...read more.

have the feeling of that rifle, clearly states that if he is talking about himself he does go to war and does survive. A gritty and emotional look at the lives of a platoon of American soldiers as they patrol, fight and die in the jungles of Vietnam as seen through the perspective of a young recruit. Two veteran sergeants clash when one of them precipitates a massacre of villagers. Platoons opening scenes also show a lot of signs, such as the opening scene when it is all foggy and hectic showing signs of confusion. Then it goes onto a plane with its door opening showing fresh recruits and implying that they are entering a whole new world. The camera focuses on one soldier indicating that he is the main character. He is then shown body bags of dead soldiers; this obviously shows danger and the fear in these new recruits. He then walks past older soldiers and looks nervously at them. A camera shows the top of the forest these soldiers are in indicating how closed in they are. They are in near darkness and it is quiet which can mean danger! ...read more.

In Jarhead, the main character is a rookie and new to war. He was treated badly by some other troops but kept on. The Disequilibrium was that the actual boredom of the war and that they could never kill was a huge problem; he started to lose himself and showed that by turning on friends. At the end, the new equilibrium is put in place as he returns home, a hero but with the mental scars that wounded him. I think that Jarhead is not just a simple copy of platoon. It is very similar in some ways but different in a lot more. The wars which are being fought in both films, they lost which adds to the similarity, but they are different films because of the characters in them. You do not find that the characters in Jarhead are like the characters in Platoon. But both characters do at first say maybe it was a mistake to join and both start as rookies. But after that the films are very different although they do both focus on the mental warfare rather than the physical. I can see how some people might think that Jarhead is just a copy but I see it as two very different independent movies. ?? ?? ?? ?? Dean Kay- Barry ...read more.