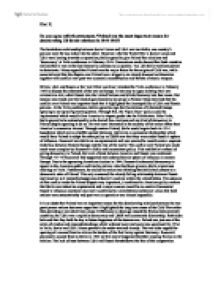 &quot;Poland was the most important factor in the deteriorating US-Soviet relations&quot;

Do you agree with the statement, "Poland was the most important reason for deteriorating US-Soviet relations in 1944-1945? The breakdown relationship between Soviet Union and USA was inevitable; one country's policies were far too radical for the other. However, after the World War 2, Soviet Union and USA were leaning towards co-operation; Stalin agreed to give Poland free elections and 'democracy' at Yalta conference in February 1945. Concessions made showed that both countries realized that it was in the best interest to continue to co-operate. Yet, US-Soviet relations persist to deteriorate. Many argued that Poland was the major factor for the origins of Cold war, while some believed that the dispute over Poland was a trigger to an already doomed collaboration together with conflict over post-war economic reconstruction and threats of atomic weapon. Britain, USA and Russia or the 'anti Hitler coalition' attended the Yalta conference in February 1945 to discuss the aftermath of the war on Europe. It was easy to agree to bring Nazi war criminals to trial, admit Russia into the United Nations and divide Germany into four zones. But tension was raised over the kind of government to be set up in Poland. Many believed that the conflict over Poland was important such that it highlighted the incompability of USA and Russia policies. ...read more.

Differences in ideology caused the friction between both countries; the USA was a capitalist democracy and USSR was communist dictatorship. Both sides believed that they held the key to future happiness of the human race. Poland was just one of the series of clashes and misunderstandings which widened more and more into open hostility. Prior to Yalta, Soviet and USA liaison proved to be under strained already. The two sides argued the opening of a second front to relieve the burden of the Red Army against Germany. Roosevelt promised a second front to Stalin in 1942 yet this never happened therefore causing friction in the relation. The lack of trust between USA and Russia foreshadows the fate of this cooperation. Stalin did not trust his allies enough not to pursue Hitler and sign a separate peace sign with Nazi Germany. He feared his allies and the Nazis would turn against communist Russia. The depth of mistrust was profound that Stalin sent spies to live in the United States to provide him with information regarding the activities his wartime allies were involved in. Through this, he found out about the Manhattan project that was building an American atomic bomb which only intensified their relations. The suspicion was shared by America towards USSR. ...read more.

Adopting the isolation policy, the Soviets treated their zone as a self-contained economic entity which exist exclusively for their economic benefit. Punishment of defeated enemy and economic exploitation were the twin principles of Soviet occupation policy. Tension was heightened when American and British zones had send reparations from their zones but did not receive food and basic commodities from the Soviet's zone. It was very apparent at this point that Soviet Union and USA were incapable in establishing a harmonious cooperation. Poland was without a question an important reason to the deteriorating US-Soviet relations. It highlighted Stalin and Roosevelt's untrustworthiness and confirmed that differences in ideologies and interest created severe friction that post war cooperation did not seem achievable. However, the dispute over Poland did not start or unravel a problem that was not already there. The depth of mistrust and the massive scale of intelligence work towards their allies prior to Yalta conference showed that the relationship was doomed from the very beginning and it was only a matter of time before both sides openly display animosity towards one another. Poland was important in a way that it made up the chains of events that widen more and more to an open hostility, but it was no more important than post-war economic reconstruction, atomic weapon and occupation in Germany. These other factors warrant equal emphasize in bringing out the hostility harbored by both sides from the very beginning on to world arena. ?? ?? ?? ?? Khal H. ...read more.