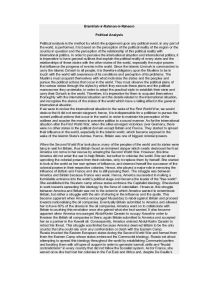 Bismillah-ir-Rahman-ir-Raheem Political Analysis Political analysis is the method by which the judgement upon any political event, in any part of the world, is performed. It is based on the perception of the political reality of the region or the country in question and the perception of the relationship of this political reality with international politics. In order to perceive the international situation and international politics, it is imperative to have general outlines that explain the political reality of every state and the relationships of these states with the other states of the world, especially the major powers that influence the progress of events in the world. Since the Islamic Ummah is commanded to carry the Islamic Da'wah to all people, it is therefore obligatory upon the Muslims to be in touch with the world with awareness of its conditions and perception of its problems. The Muslims must acquaint themselves with what motivates the states and the peoples and pursue the political actions that occur in the world. They must observe the political plans of the various states through the styles by which they execute these plans and the political manoeuvres they undertake, in order to adopt the practical style to establish their state and carry their Da'wah to the world. Therefore, it is imperative for them to acquaint themselves thoroughly with the international situation and the details related to the international situation, and recognise the stance of the states of the world which have a telling effect in the general international situation. ...read more.

By reviewing the status of the major powers, it emerges that there exists a division between the states of the Western Camp, which led to the weakness of all its states save America. She remained the leading superpower and her position was strengthened despite the political manoeuvring and the military activities of Britain in order to curb her dominion. On the other side of the coin, there was the Eastern Camp that came into being solely on the basis of the Communist ideology. Russia led it intellectually and militarily. The policy of the Eastern Camp was based on the impossibility of a peaceful existence between Capitalism and Socialism. All the Communist books refer to the impossibility of coexistence between the two ideologies. No Communist politician, ruler or otherwise, was allowed to proceed in the policy of peaceful coexistence between Capitalism and Communism because it was deemed a deviation from the Communist idea in foreign policy. This struggle continued consistently between the two camps and they remained in a state of acute conflict. The cold war waged on between them and each side was on constant alert for a possible war. This went on until Bulganin and Khrushchev came to power. A new school of thought came into being and brought a new interpretation of Communism that agreed with Russia's interests. Hence, they made attempts at bridging the gap with America and establishing stronger links with her. ...read more.

What is witnessed in terms of crisis in the Middle East is but part of the actions undertaken by the two superpowers to uproot the British presence. As for Germany, the two superpowers agreed to uproot the military threat forever by keeping Germany as two states, East and West, and determining this division by establishing a federation between them. They agreed to prevent Germany from acquiring nuclear weapons and restrict her military industry. They also agreed on a specific status for Europe as a whole, namely to prevent its states from establishing unity between them, for this would make America lose her status in the "free world". Hence, America allowed Russia a free rein in Eastern Europe, to maintain them under her dominion within the Communist camp, even if this led to occupation by force. In return, America was given a free rein to discipline China, who started to rival Russia over the leadership of the Communist camp. Hence, the two camps have disappeared and there are no international camps in the world at the moment. The international situation has radically changed since the First World War and up until now i.e. it became isolated states, each one aiming to gain the spoils and weakening other states. Two superpowers, America and Russia, now control the international situation. A politician must have information about this international situation and pursue it constantly so that matters become clear to him and so that through the political analysis he is able to give his opinion on every political event, thus his judgement becomes closer to soundness and realism. ...read more.