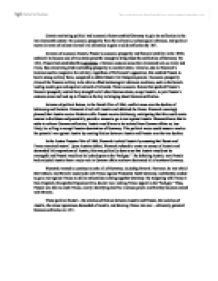 Certain motivating political and economic factors enabled Germany to gain its unification in the late nineteenth century. Its economic prosperity from the zollverein, technological advances, and political moves in terms of actions allowed it to ultimately acquire a solid unification by 1871. In terms of economic factors, Prussia's economic prosperity and financial stability in the 1850s enabled it to become one of two states powerful enough to bring about the unification of Germany. By 1834, Prussia had established the zollverein, a German customs union that eliminated tolls on rivers and rivers, thus stimulating trade and adding prosperity to member states. ...read more.

In terms of political factors, in the Danish War of 1864, conflict arose over the duchies of Schleswig and Holstein. Bismarck allied with Austria and defeated the Danes. Bismarck cunningly planned that Austria receive Holstein while Prussia receive Schleswig, anticipating that this would create tension in the future and potentially provide a reason to go to war against Austria. Bismarck knew that in order to achieve German unification, Austria would have to be isolated from German affairs or, less likely, be willing to accept Prussian domination of Germany. This political move would ensure a motive for potential war against Austria by creating friction between Austria and Prussia over the two duchies. ...read more.

Bismarck wanted to continue to unite all of Germany, including Bavaria. However, he was afraid that Catholic-tied Bavaria would side with France against Protestant North Germany, and thereby needed to go to war against France to utilize nationalism to bring together Germany. By tampering with France's Ems Dispatch, this sparked Napoleon III to declare war, making France appear as the "bad guy." Thus, Prussia was able to crush France, clearly identifying itself as a serious power, and thereby becomes united with Bavaria. These political factors - the creation of friction between Austria and Prussia, the isolation of Austria, the minor reparations demanded of Austria, and drawing France into war - ultimately garnered German unification in 1871. ...read more.