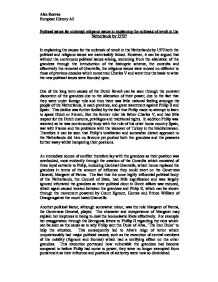 Political issues far outweigh religious issues in explaining the outbreak of revolt in the Netherlands by 1572?

Political issues far outweigh religious issues in explaining the outbreak of revolt in the Netherlands by 1572? In explaining the causes for the outbreak of revolt in the Netherlands by 1572 both the political and religious issues are inextricably linked. However, it can be argued that without the continuous political issues arising, stemming from the alienation of the grandees through the introduction of the bishopric scheme, the consulta and effectively the removal of Granvelle, the religious issues were indeed no different to those of previous decades which concerned Charles V and were thus the basis to what the new political issues were founded upon. One of the long term causes of the Dutch Revolt can be seen through the constant discontent of the grandees due to the alienation of their power, due to the fact that they were under foreign rule and thus there was little national feeling amongst the people of the Netherlands, in each province, and great resentment against Philip II and Spain. This dislike was further fuelled by the fact that Philip made no attempt to learn to speak Dutch or French, like the former ruler his father Charles V, and had little respect for the Dutch customs, privileges and traditional rights. ...read more.

The growth of heresy initiated many of the new religious reforms which in turn had many political consequences. The religious issues however were particularly fundamental. With the introduction of the Bishoprics Scheme in 1561, the increased new amount of fourteen bishoprics and 3 new archbishops also brought along a new wave of inquisitors to stamp out heresy, which therefore led to further political implications not only those of religion. Heresy had been growing in the Netherlands since Charles V reign when it had first started to spread from Germany. This new increase of heresy can be seen as to why the bishopric scheme and the inquisition where introduced as Philip had been well known for being uncompromising on matters of religion. One cause of the Dutch Revolt was indeed primarily concerned with religion, the Bishoprics Scheme, however had large political implications, as for the grandees it was the political implications that they were more against, rather than the introduction of the new diocese and appointment of bishops. One example as to why the grandees were angered was because of the fact that with the Bishoprics Scheme, anticlericalism was combated, and thus abuses such as nepotism and simony were brought to an end. This ending, of in particular nepotism, therefore hindered the bishops as they now found it difficult to find a place for their illegitimate children to reside. ...read more.

It can be seen that religious factors were indeed important in terms of motivating the revolt yet only up to the year of 1572. After the 'Petition of Compromise' and thus Margaret's relaxation of heresy laws meant that hedge preaching of was able to thrive in an environment where it would not be suppressed and thus heresy grew from the ideas spreading from Germany. This hedge preaching can be seen as the trigger cause of the Iconoclastic Riots in 1566, a religious cause, and therefore religion was seen as the main driving force by the peasants. With the Sea Beggars attack on Brielle in 1572, the religious differences between Spain and the Netherlands concerning Catholicism had come to the forefront of the reasons for the Revolt. However the religious policies of Philip II had not differed greatly to those of Charles V, and thus it can be seen that during Charles' reign; the involvement of the grandees was much more integrated, however Philip managed to alienate the grandees (e.g. with the introduction of the Consulta and the Segovia letters which consequently brought Alva). Therefore it can be seen that the causation of the Revolt was purely religious, Orange sided with whichever political body could further his own cause at the time. ?? ?? ?? ?? Alex Reeves European History A2 ...read more.